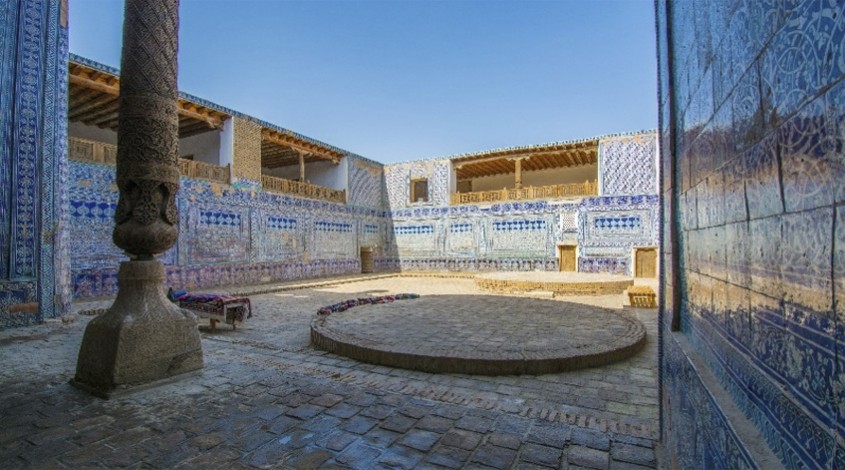 Among all Eastern rulers, there was a custom to build luxurious palace constructions for life with worthy grandeur and rest of heads of dynasties themselves, their wives, harems, and subjects. In addition, it was a symbol of their force and power for other states.

Since there was more than one Khan in Khiva Khanate, it is logical that there were several such palaces in Khiva, which are quite well preserved and have reached our time. One of the most popular attractions and frequently mentioned in history is the Allakulikhan Tash-Khauli harem palace, which is translated from the ancient Uzbek language as a “stone palace”.

Tash-Khauli got its name for a reason: the entire palace was built of burnt bricks of rectangular shape, unlike previous buildings, which were constructed from a less good material – of rammed clay rectangular bricks.

The sight was located in the heart of the ancient part of the city, which was destroyed many times, and had a square shape of 80×80 meters.

This structure is a vivid example of XIX century monuments, its appearance reminds another important monument – Kunya-Ark.

Tash-Khauli, called nothing less than a miracle, was built for eight years – from 1830 to 1838. Because of economic and political recession, the project to build a Khan’s dwelling stopped several times, and every time it was resumed by new architects.

Thanks to this construction, a new cultural and public complex was created in the central part of the Khiva Khanate.

Only the best craftsmen and builders of the XIX century took part in this construction – naqqosh and kashinpaz. The construction resembles a huge fortress with high towers and very massive gates.

All the walls and columns of the building, or rather its paintings and wood carvings, indicate how long and fruitful was the construction of the Tash-Khauli harem palace.

Harems always arouse interest. Any girl always examines this kind of places with great curiosity. Everyone is very interested in what it is like to be the concubine of a Khanate ruler, or even his wife.

Each private rest room is unique in its own way: one is covered with gold and the other with mosaic maiolica. Each chosen one always had only one goal – to become his wife. Every day was a test, so every concubine was ready to kill her rival. Sometimes, one of the concubines gave birth to a son, and others faked the death of this defenseless child.

As a punishment for the death of the heir, the Khan issued a decree on the cruel execution: the guilty woman was wrapped in a carpet, put in the middle of the square on the very heat, and a bucket of rats was put on head, which later tormented her to death. But such a terrible fate did not deter candidates for the right to become the wife of the ruler.

In 1945, the Tash-Khauli harem became a history museum, and later, after restoration, it was made into a house of arts, where craftsmen of the East work to this day.

Canaan Travel invites Uzbekistan guests and residents to visit marvelous Khiva and see unique monuments of Oriental history with their own eyes.