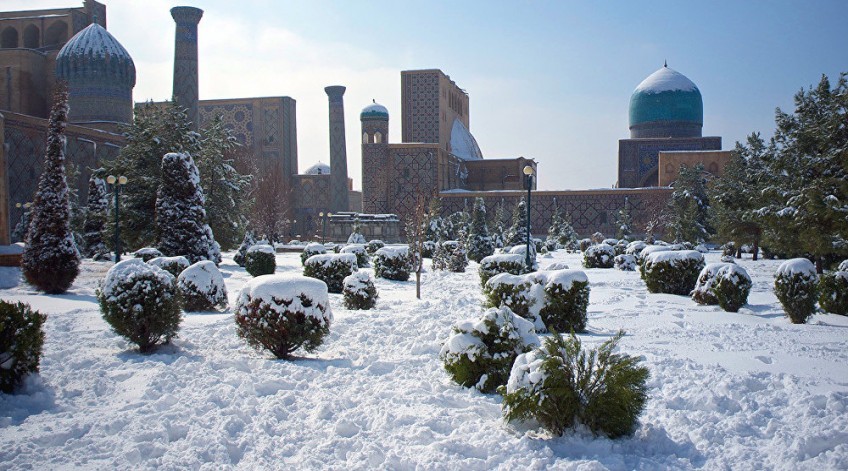 The most favorable time to get acquainted with the ancient cities of Uzbekistan is the famous May holidays from 1 to 9. It’s a journey into an atmosphere of stark contrasts.

Spring is rightly called the best time for a trip because the weather is extremely gentle to travelers and pleases the eye with bright colors on the background of many ascetic attractions. But don’t be confused by the restraint of the appearance of unique monuments – all their splendor, traditionally, is hidden inside. Spring sunshine is good for health, air is healing for the respiratory tract.

But Uzbekistan is no less beautiful in autumn. The weather is very similar to spring, besides, there begins a period when you can fully enjoy the gastronomic pleasure – the fruit season. Bazaars in towns and villages are overflowing with different varieties of all the fruits known throughout the world. Sun-soaked melons and watermelons, great grapes, and much more.

Autumn is a very good time to visit the main sights of the Republic, most of the architectural heritage is located in the southern part of the country, and in summertime moving around the city can be tiresome.

The main advantages of tours in spring and autumn:

As long as scientists cannot agree on the consequences of global warming, Uzbekistan sees climate change with its own eyes. Previously, cold winters were replaced by rather warm winters (not below -10°C on average) with little precipitation. But the amount of precipitation in other seasons has increased significantly. Even in summer, you can get caught in the pouring rain. Thus, the air temperature from May till September does not fall below +12 degrees, and during the hottest time of summer, it reaches +48 degrees sometimes.

The humidity is low in Central Asia. This is understandable, because most of the territory is occupied by deserts, and there are very little waters. The nearest Caspian Sea is over a thousand kilometers away.

You can have a good time at mountain resorts. For example, in the foothill areas, you can do family picnics held in the clean air, as rainfall during these months is minimal. The weather in May and November is considered very favorable for conquering mountain routes with a group of amateur tourists. The paragliding season opens in the mountains near Chimgan in April-May.

And, of course, spring and autumn are perfect for walks on excursion routes both in cities of Uzbekistan and in regions.

Canaan Travel will provide the best holidays in spring and autumn, when the weather in Uzbekistan stabilizes, becoming comfortable for travel. Allow yourself to enjoy what is created by nature itself. All you have to do is choose a tour and a date, and we take care of the rest.