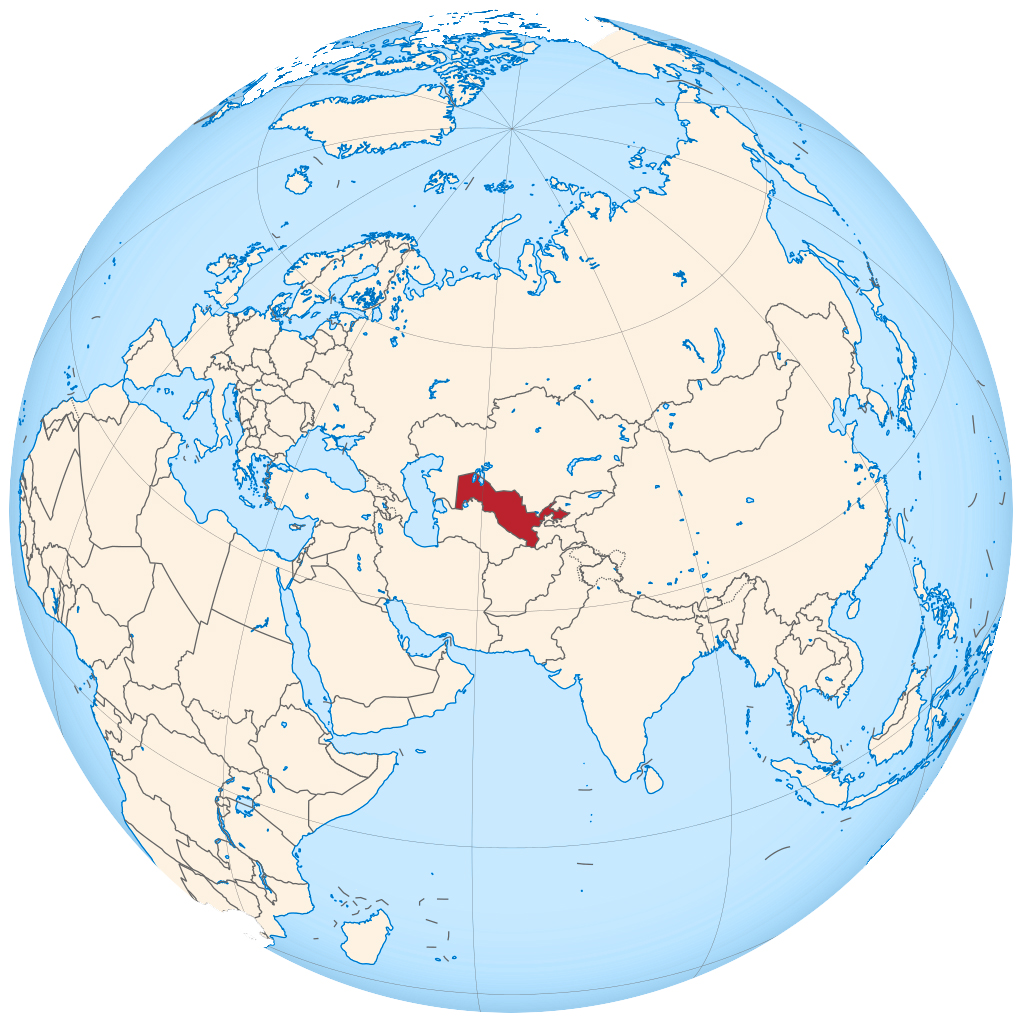 In its present form, Uzbekistan was formed on October 27, 1924 as the Uzbek USSR. Prior to this, the territory of Uzbekistan was divided into the Bukhara Emirate, Khorezm and the Kokand Khanate (from the 16th to the 20th century).

The republic is located in the very center of Central Asia and is adjacent to Kyrgyzstan, Kazakhstan, Turkmenistan, Afghanistan and Tajikistan.

Uzbekistan covers an area of ​​448,924 square kilometers, over 95% of which is land. The country is landlocked.

Since 1930, the capital of Uzbekistan is the city of Tashkent. This status was transferred to the city by the ancient and beautiful Samarkand.

The official state language of the republic is Uzbek.

Uzbekistan is a secular state. The overwhelming majority of the population professes Islam, among other religions are Christianity, Judaism, Bahá’í, Krishnaism and Buddhism. 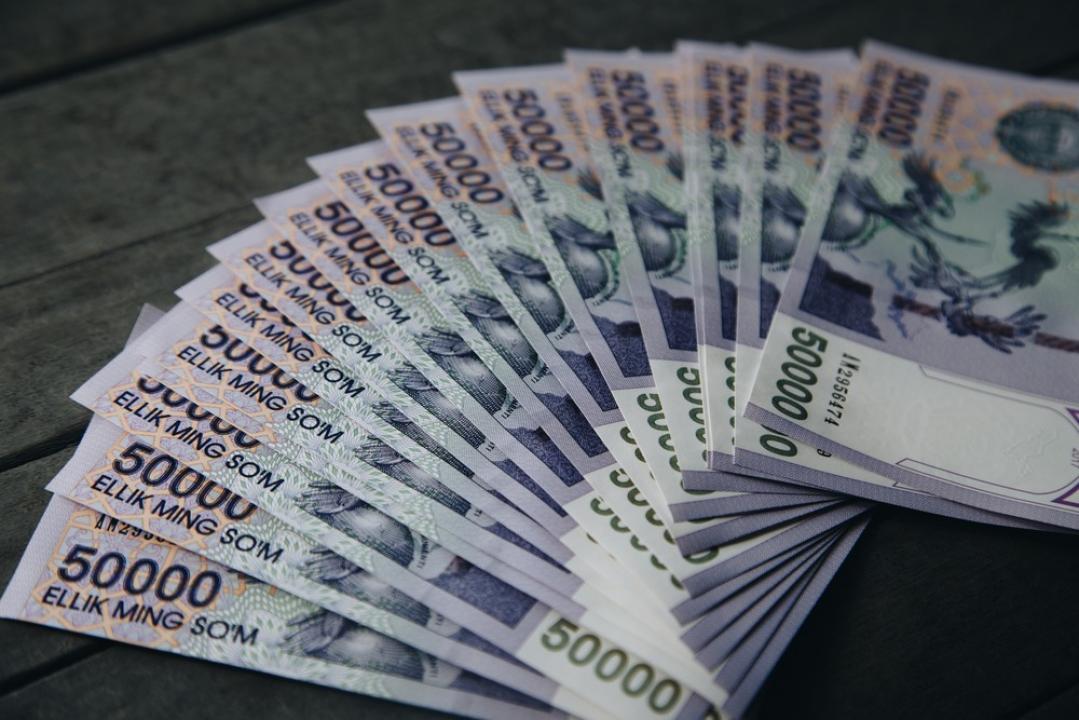 Since 1990, a single time has been in effect throughout Uzbekistan in the UTC + 5: 00 time zone format. The time difference with Moscow is 2 hours, with Rome 3 hours, and with Washington — 9 hours. 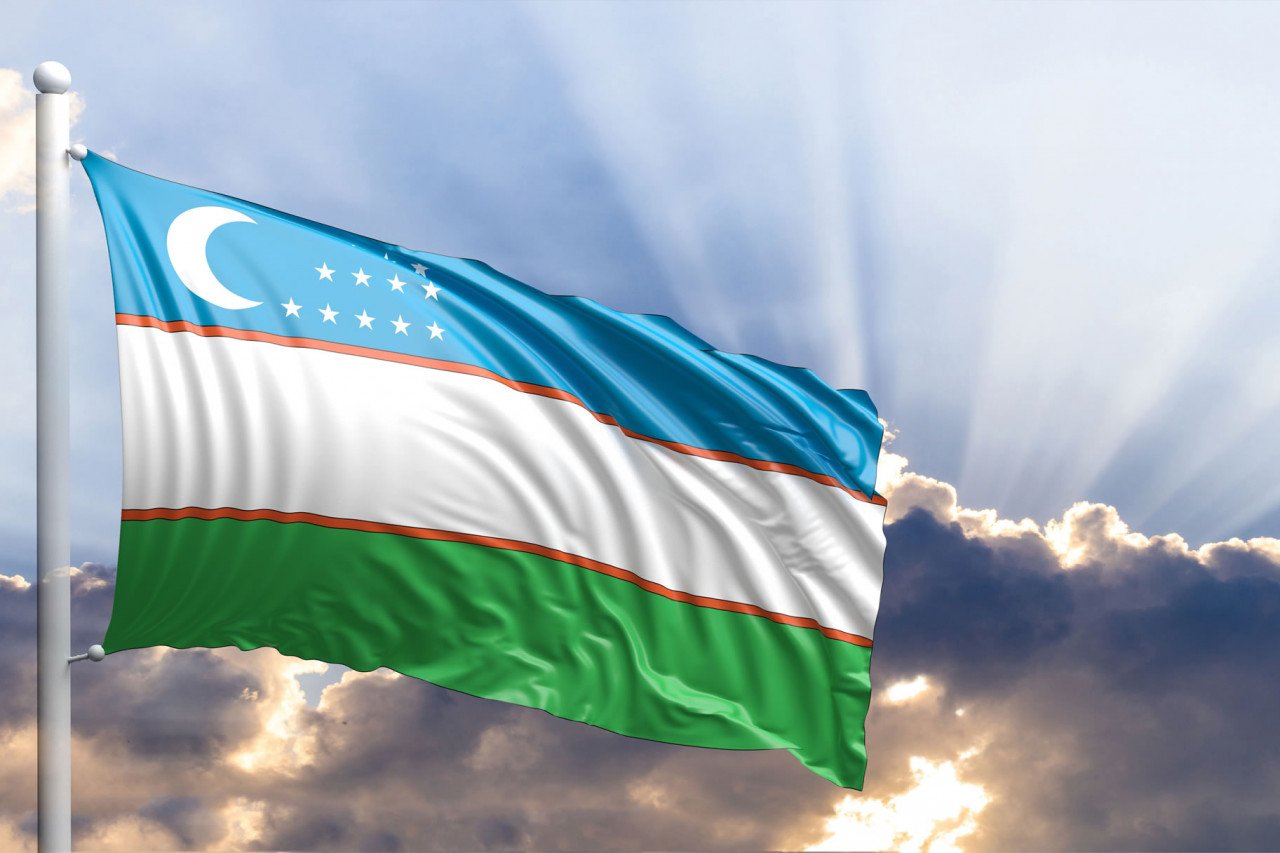 4 colors of the national flag of the republic symbolize:

The crescent moon and stars are a symbol of a cloudless sky, there are only 12 stars – according to the number of months in a year. In addition, in the Muslim tradition, 12 is the number of perfection. 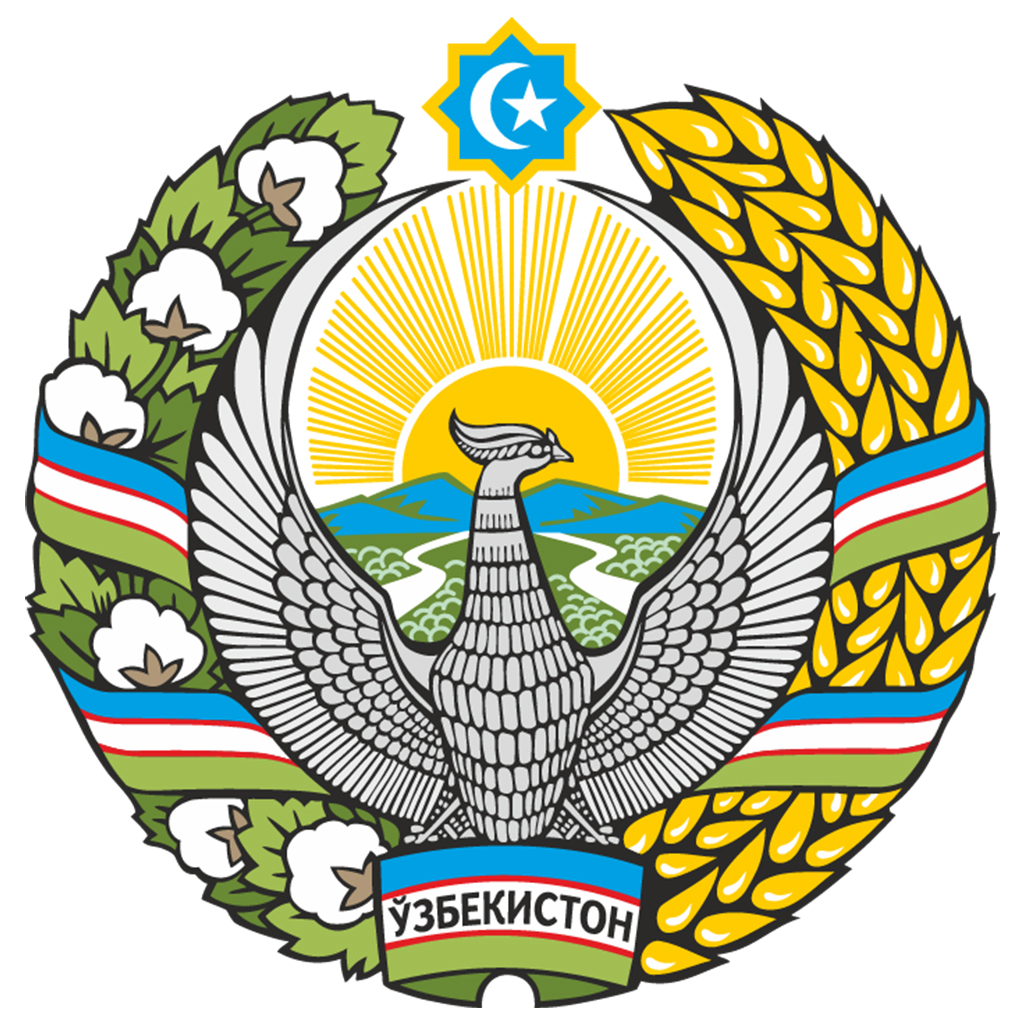 Coat of arms of Uzbekistan

In the foreground of the emblem of Uzbekistan, the legendary bird Humo is depicted, personifying happiness and the desire for freedom. The bird “sits” on a pedestal covered with the flag of Uzbekistan with the name of the republic inscribed on it. In the background are wheat ears and open cotton bolls that have become the country’s trademarks. At the top is an eight-pointed star, into which a crescent moon and a five-pointed star are inscribed. In the background of the coat of arms there is a rising sun illuminating the path of the Uzbek people, the mountains and valleys of the country, as well as the two main rivers of Uzbekistan — the Amu Darya and the Syr Darya.

Why is it worth going to Uzbekistan? 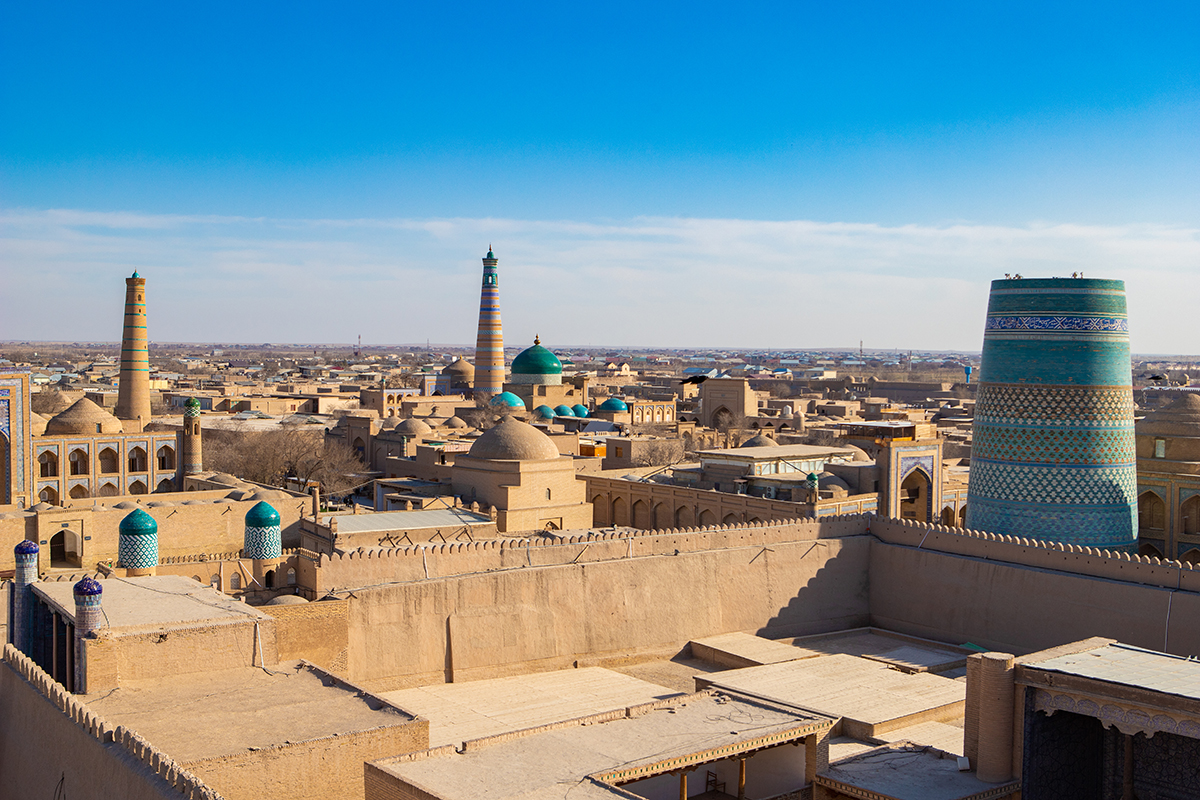 Uzbekistan is a country of ancient cities and a unique culture, familiar to many from only oriental myths and fairy tales. The cities of Uzbekistan have existed for millennia, and Samarkand is the same age as Babylon and Rome. You can get acquainted with many monuments personally, visit the preserved ancient fortress of Khiva – Ichan-Kale. Uzbekistan is a land where you can not only touch history, but also capture it in photographs.

What time of the year is it better to go to Uzbekistan?

Going to Uzbekistan for the first time, it is better to choose spring or early autumn – they are the softest and most familiar to foreigners. And if the Uzbek winter is endured incomparably easier than in any more western country, then summer sometimes becomes a real test for guests, because the temperature here can go beyond +50 degrees.

How many days do you need to travel to Uzbekistan?

Every city and region of Uzbekistan is different from the other. Once the territory of the republic belonged to three different khanates, in which different peoples lived. That is why the cities differ quite a lot. To get to know the most famous cities of Uzbekistan — Tashkent, Samarkand, Khiva, Bukhara, Fergana, Nurata, Termez and Nukus — you will need from 2 to three days each. Of course, you can meet in one day, but how can it be called a journey?

Uzbekistan has a visa regime with a number of states — with Russia, Kazakhstan, Ukraine, Belarus, France and others. For tourists from other countries, a visa is required. Upon entry, you must fill out a customs declaration. From the nuances — you cannot take out of the country more than you brought in, and more than 2 liters of alcohol per person.

Uzbekistan consistently holds the title of one of the safest countries for tourists. The country was ranked 5th in the Solo Travel Safety Report 2019. The work of law enforcement agencies and a special oriental attitude towards guests contribute to tranquility in the country. 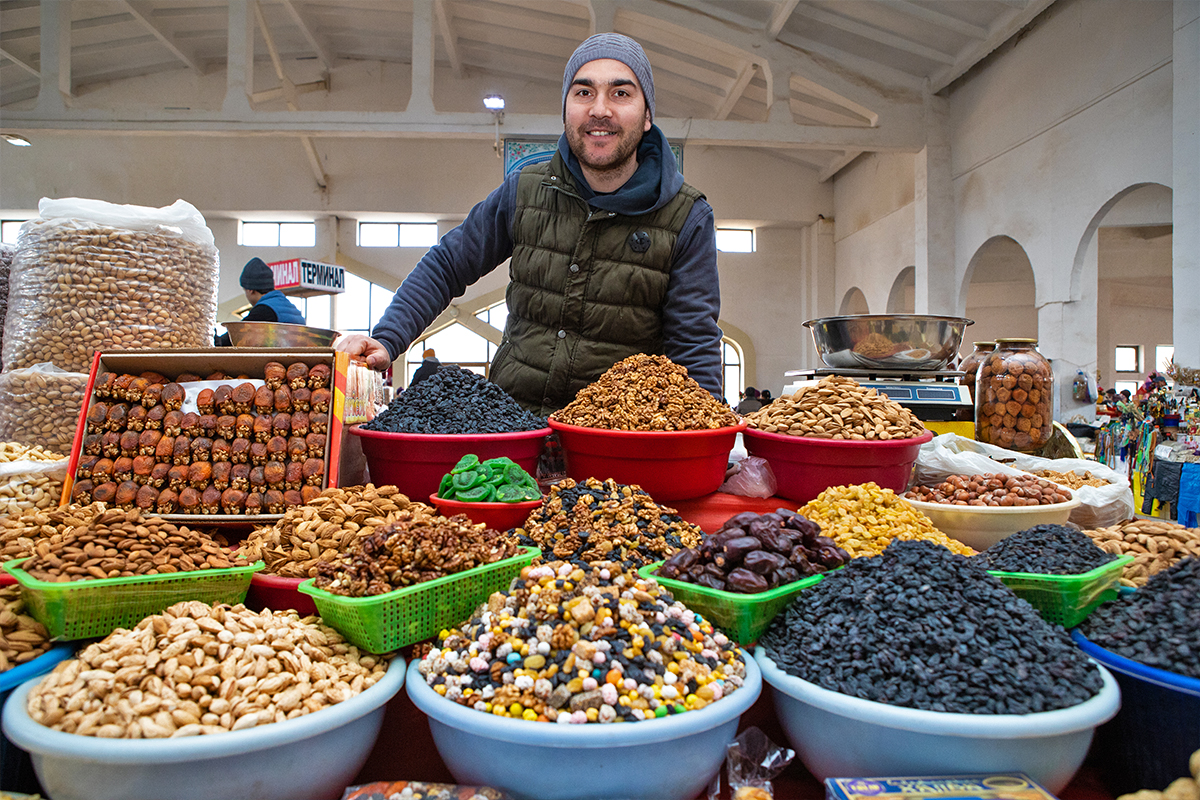 The cost of food in Uzbekistan

Uzbekistan is famous for its cuisine, and one of its most pleasant characteristics is the price. You can have a snack with samsa for 5,000 soums ($ 0.4, 30 rubles), or you can arrange a real feast for 800,000 soums ($ 75, 5,600 rubles). It all depends on the establishment and your appetite. But it is especially worth paying attention to Uzbek fruits and vegetables – very tasty and very affordable. The opportunity to taste Uzbek tomatoes, melons, apricots, grapes and many others should not be missed.

Cost of living in Uzbekistan

As in any other tourist country, the cost of living for locals and for tourists varies greatly. Renting an apartment in the capital for a month will cost 200-300 dollars (15,000-22,000 rubles) for locals. While a tourist for the same money will be able to spend only a few days in a good hotel. Of course, there are many hostels available for guests now, but this is not at all the same level of comfort.

In Uzbekistan, it is customary to include service in the bill, so tip is usually left at the discretion of the guest. Often times, the tip is equal to the difference between the final bill and a convenient round amount. For example, if lunch cost 132,000 soums, then the payment is left at 150,000 soums. If you like the service, you can leave a big tip, but if you pay exactly the bill, no one will look askance at you.

How to dress in Uzbekistan

Despite the fact that the republic is a secular state, the vast majority of residents profess Islam, because you should not choose too revealing clothes. And the scorching Uzbek sun will not please your skin in this case. It is recommended to avoid black clothes, because in them the tourist risks experiencing all the “delights” of summer heat.

In addition, it is important to understand that many sights are active Muslim sites, so it is better for women to have a headscarf with them. Also be aware that you will need to take off your shoes to visit certain sites.

The history of photography in Uzbekistan is quite long … five years ago there was almost no “safe” object for shooting – vigilant law enforcement agencies could demand that almost any picture be removed from the device. Since then, the situation has changed dramatically through the efforts of the current leadership of the country. Any object that does not have a special prohibition sign can be removed by law. The same applies to the metro and monuments – the main attractions of the country. However, for filming a number of government buildings, you need to obtain permission from the city khokimiyat (mayor’s office). 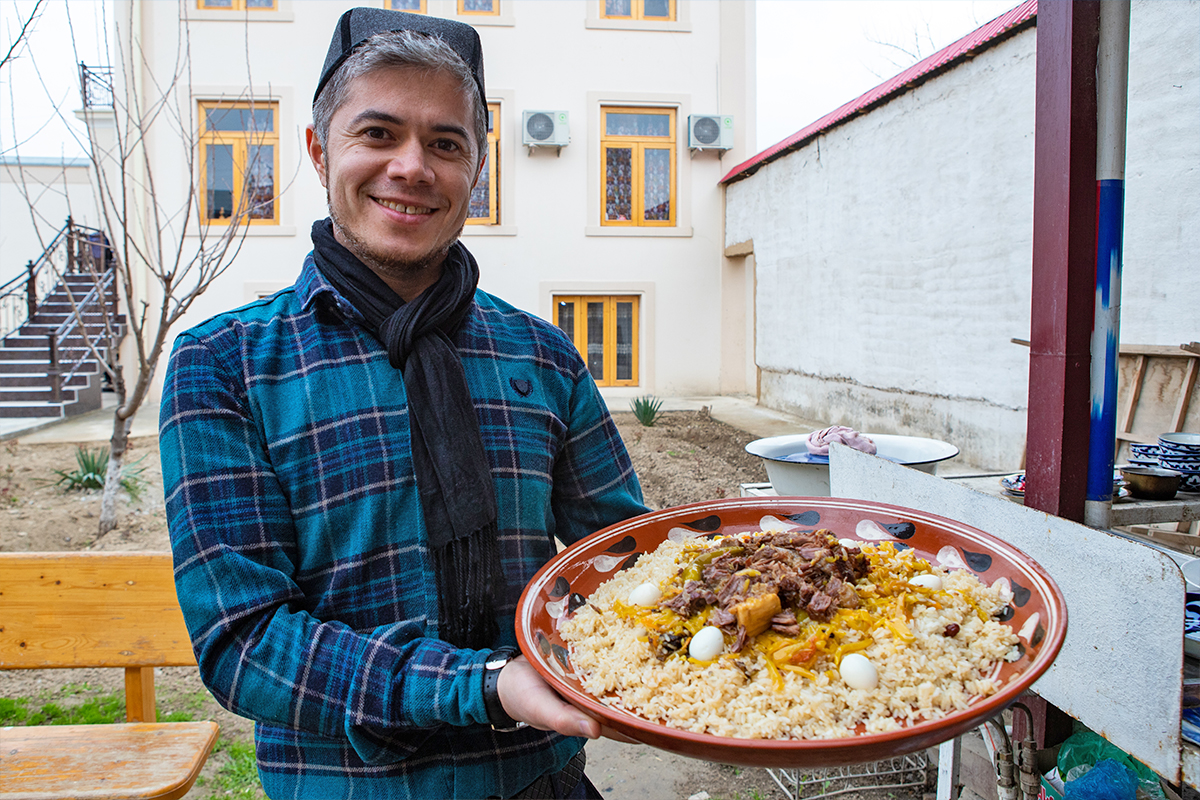 The national cuisine of Uzbekistan is famous far beyond the borders of Asia. Therefore, gastronomic tourism in the country is very well developed. Each region of the republic has its own culinary traditions and, without fail, its own type of pilaf.

Among the most popular Uzbek dishes:

Particular attention should be paid to Uzbek wines, which are among the best in the world due to the abundance of the sun and the variety of grape varieties.

You can find out more about Uzbek cuisine on our website.

In the post-Soviet space, which includes Uzbekistan, one should not be afraid to remain incomprehensible, because the Russian language is familiar to a large part of the population. Currently, Uzbek people are very interested in English, so you can try to conduct a dialogue in it. But it’s still useful to know some words in Uzbek that can help you communicate: 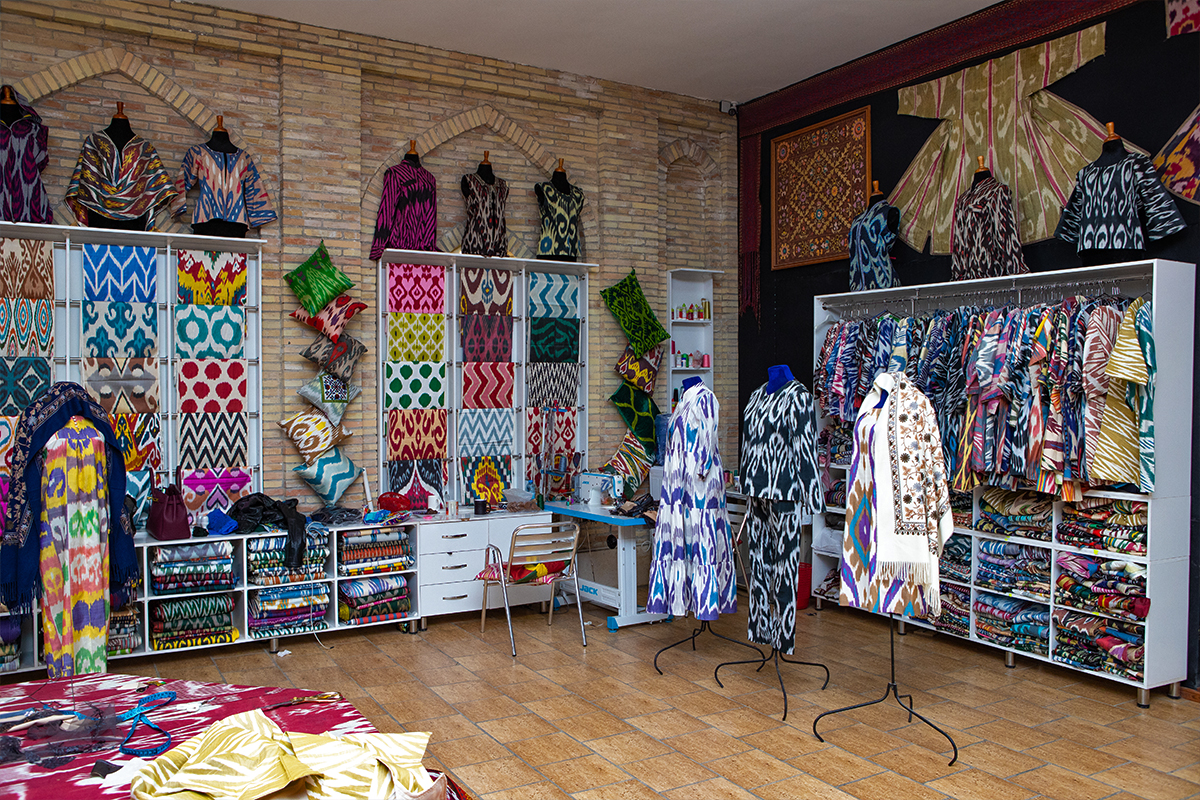 In memory of a trip to Uzbekistan, you can buy a variety of souvenirs. The most popular of them are ceramics, national clothes, musical instruments, wooden and metal souvenirs and, of course, jewelry.

In Uzbekistan, European sockets of two standards are installed everywhere — type C and type F. The electric frequency is 50 Hz, and the voltage is 220 V.

The main means of transportation in the cities of Uzbekistan are buses and taxis. The capital is famous for its excellent metro, ecologically safe trams and trolleybuses run in other large cities. There are road, rail and air links between the cities.

The 5 main mobile operators in Uzbekistan are Ucell, Beeline, UMS (formerly MTS), Perfectum and UzMobile (state operator). Communication cost is relatively low. The speed of the Internet in the country is constantly growing, in hotels (with rare exceptions) there is access to free Wi-Fi, but it should be noted that the price and quality are inferior to European ones, so it is better to be prepared for this.

In case of emergency, you can always ask for help at the embassy of your country or by emergency phone numbers:

If you are not recognized as a tourist, you can save a lot. In the central markets, it is customary to bargain for every product, except for the simplest, because the East is the East. Sometimes it is more profitable to shop in supermarkets — there you will not encounter a “tourist” trick.

Use taxi services near airports and train stations only in the most rare case, because the price of such a trip can exceed the real one by two, three, and sometimes even ten times. It is generally much more convenient to use local taxi services, which can be easily found on the Internet.

In Uzbekistan, it is customary to treat older people with great respect. They are helped on the streets, they give up their seats and are not interrupted in conversation. Another little advice – if you do not need a product or some kind of service, make it clear and clear, otherwise you will not be left behind.

It is most convenient to exchange currency in banks — there you will find the most acceptable rate. 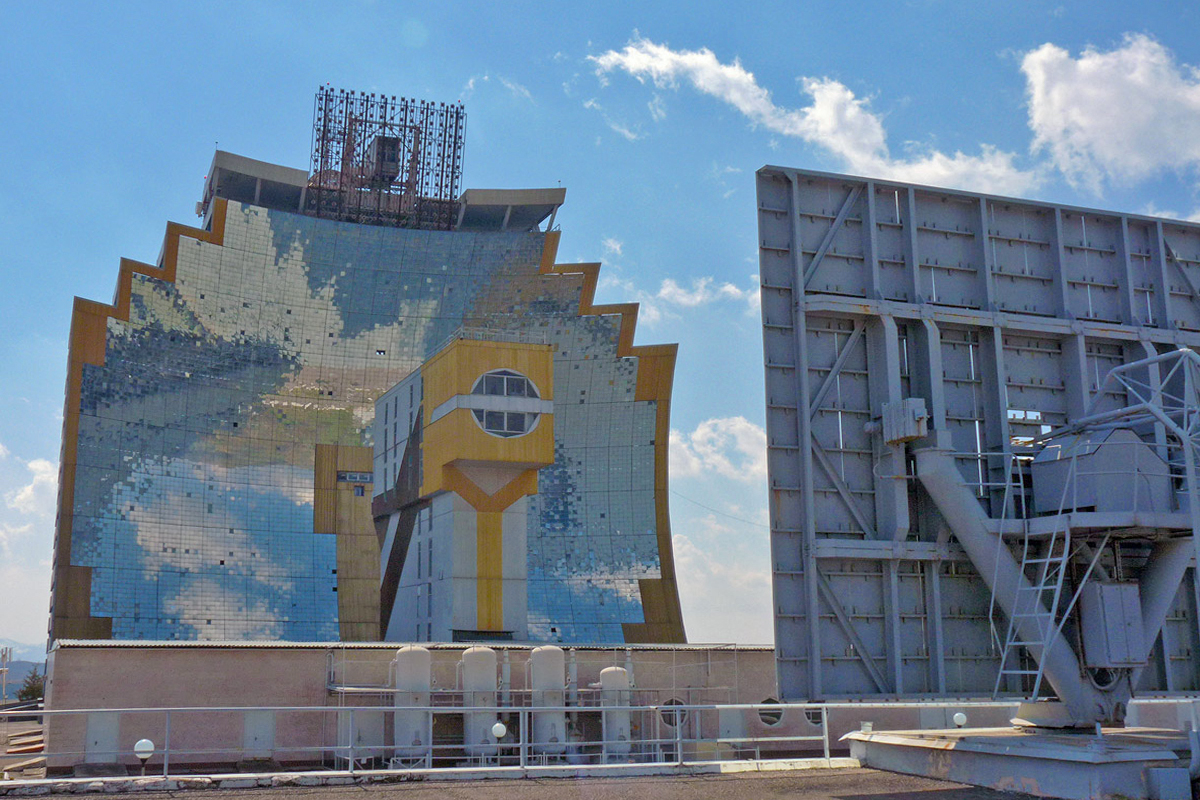 A notable feature of the countries of Central Asia, especially Uzbekistan, is the long summer. We can say that it starts at the end of April and ends closer to October. That is why the sun-filled Uzbek melons and grapes are recognized all over the world.

Uzbek pilaf is included in the UNESCO Intangible Heritage List. So pilaf is not just a dish, it is an example of culture.

Fossilized shells and other formations can be found in the mountains of Uzbekistan. Some lucky ones may even find a prehistoric shark’s tooth. This is the legacy of the ancient Tethys Ocean.

The founder of modern medicine is the medieval scientist Abu Ali ibn Sina, who was born near Bukhara and is better known as Avicenna.

Modern electronic television was born in the capital of Uzbekistan, Tashkent, in July 1928.

You will not learn about the many interesting objects of Uzbekistan from any guidebook. The fact is that there are so many interesting places that only the best ones are included in the selection. For example, the solar solar complex is one of the world’s largest solar ovens with a parabolic mirror 47 meters in diameter.

Our experts are always happy to advise each tourist personally — come to Uzbekistan, and we guarantee you a pleasant trip!