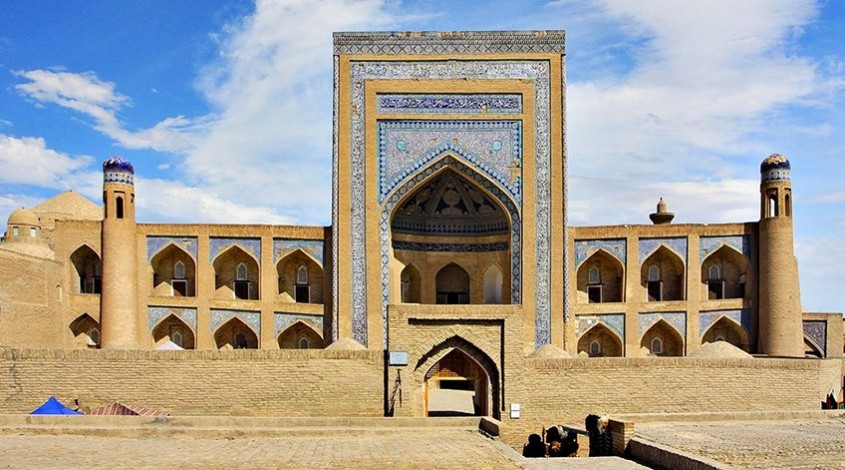 For the most part, the period of bright colors in the architecture of Khiva fell on the period of XVII-XIX centuries, and earlier samples of architecture were made in an ascetic spirit, in strict colors, and sometimes even without finishing.

One of the oldest madrasahs in Khiva is Khodja Berdibay Madrasah Construction of the attraction began in 1688 and was initiated by several rich people who were respected among the city population.

It was decided to build a landmark near Palvan-Darwaza gates. It was one of the city’s main gates, so the madrasah was supposed to become an important and visited educational institution. 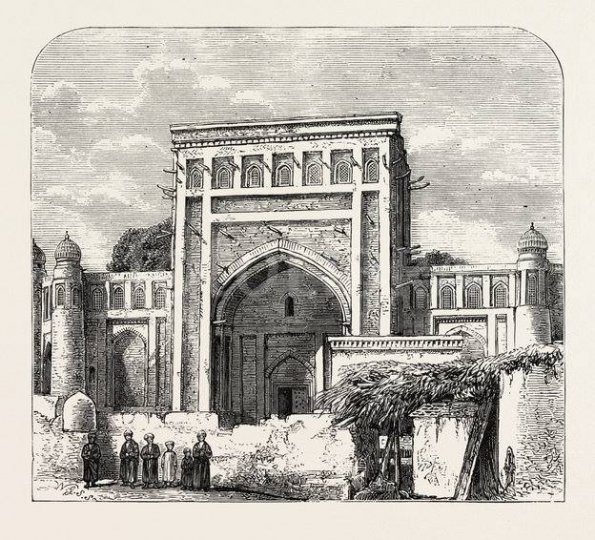 The structure was standard: a rectangular perimeter, where there were rest rooms for students and teachers; an inner courtyard with iwans in the corners, where students hid from the heat of summer days; carved doors at the entrance, wooden grates with paintings in the window openings, which were mostly the main and brightest element in the decoration of the madrasah.

The far corner was occupied by the training room, darskhona. This small room with a regular square dome could hold a couple of dozens of people. There were 16 hujras in total. The regular geometric shapes decorated the wall of the main entrance – several arrow-shaped arched openings. Minimalism and asceticism can be traced in every detail.

In the first half of the XIX century, Allakulikhan, a famous Khiva ruler, conceived a new madrasah. Just like Khodja Berdibay Madrasah, it was decided to place it at the main gate of the fortress.

According to the Oriental tradition, the new building was to be bigger and brighter. By that time, the inner courtyard of the fortress was so densely built up that there was not enough space for such a scale, so the part of the city wall was broken during the construction, and the new Allakulikhan Madrasah was constructed on the territory of Khodja Berdibay Madrasah.

Thus, the territory was divided into two sections with different foundation level. Externally, it was very similar to a nomadic knapsack, hurdjum, which hung on both sides of a horse or camel. This is how Khodja Berdibay Madrasah, got its second name – Hurdjum.

Canaan Travel is happy to reveal the beauty of wonderful Khiva, an ancient city, the whole center of which is included in the UNESCO World Heritage List, to all guests and residents of Uzbekistan. Our tours will allow you to feel like a part of a real Oriental fairy tale and feel the spirit of Asia.