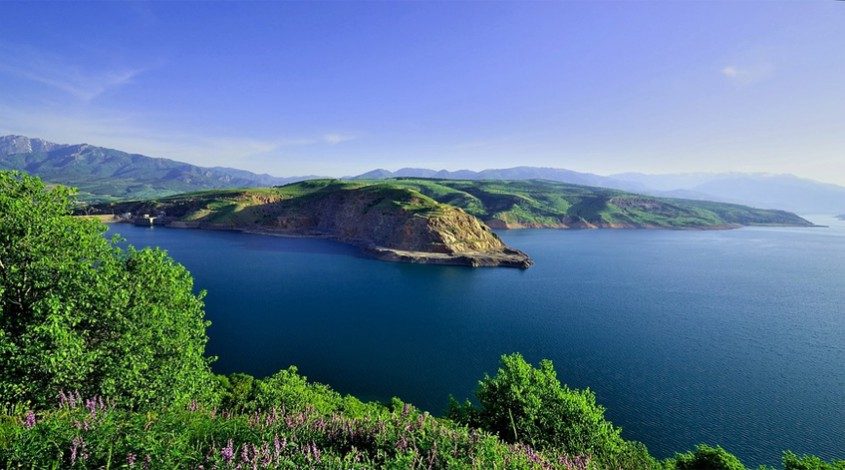 The Charvak reservoir is a grand man-made structure. Once at the intersection of three major rivers — Pskem, Ugam, and Chatkal — there were four gardens (“Chor Bogh” which means “four gardens”), which are now hidden under water at a depth of more than a hundred meters. In 1964, during the construction of the Charvak hydroelectric power station, the village of Charvak was founded.

The reservoir dam itself is a strong 168-meter tall stone-sand fortification.

The reservoir is filled with the waters of Chirchiq, one of the largest rivers in this region. Today along the entire coast of the Charvak reservoir there are cafes, summer cottages, hotel complexes and beach zones, many gardens, mountain camps, children’s health camps, dispensaries and hospitals. Established infrastructure, transport system and stunning clean air attract thousands of tourists all year round. Many species of fish in the Charvak reservoir resulted in great interest in sports fishing both among local fishermen and among foreign tourists.

Mountain tourism in Uzbekistan and mountaineering in these regions are also well developed. Indeed, almost any peak in the vicinity of the Charvak reservoir offers a breathtaking view. Due to the increased popularity of this place in terms of tourism in the vicinity of Charvak and Chimgan, the infrastructure is rapidly developing, turning the holidays of visitors on the coast into a real paradise.

Since Central Asia has not many water resources, Charvak is a favorite place for many Uzbeks, because here you can experience all the charms of the resort on the coast. Besides, the picturesque surroundings of Charvak themselves became a recognizable attraction — a rare photographer who was here has no favorite photo of this place.

However, Charvak is interesting not only for its nature, on its shore is the Bogiston village, glorified by his two sons — Sheikh Hovendi at-Tahur, better known as Sheikhantaur, and Sheikh Ubaidullah Ahror, who was descendant of the man mentioned above.

Sheikhantaur was a father of the Sufi Order of Naqshbandi, his mildness, wisdom and care for the deprived glorified him throughout whole Maverannahra. His doctrine of love and kindness found support among the thousands of people, who later called him “the wisest of the wisest”. In order to pay tribute to his memory, the great Tamerlan erected a mausoleum in Tashkent dedicated to him.

Ubaidullah Ahror, his descendant, continued his work, became a great master of Sufism and took spiritual leadership over the entire region in the 15th century.

Canaan Travel will reveal to you the beauty of these wonderful places and introduce you to visit the amazing East.