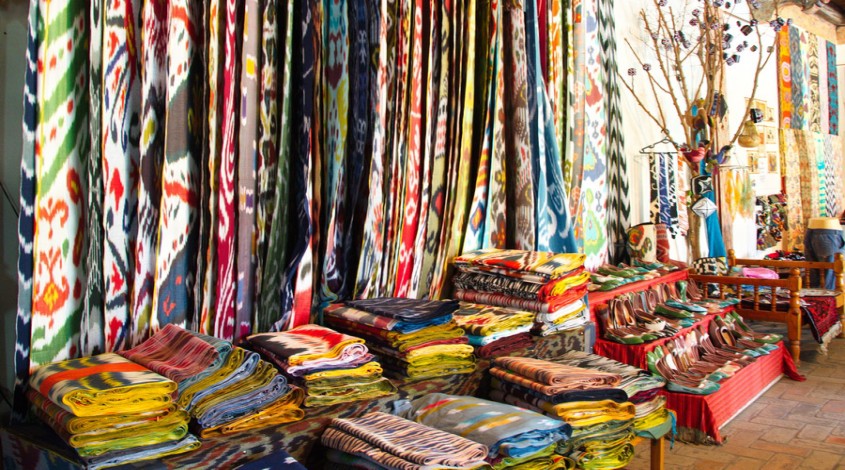 One of the most popular legends of the emergence of Khan-Atlas, the national fabric, is the legend of the Rich Khan and the poor weaver. According to the legend, in search of the fifth wife in his harem, the choice of the khan fell on the beautiful daughter of a poor weaver. However, neither the girl nor the weaver herself wanted her to become the wife of the khan. The girl’s father begged the khan to give up his decision, but neither pleas nor persuasion helped, the khan was adamant.

And to get rid of the weaver who pleaded with him, the khan suggested an alternative, the weaver will create something by morning that will impress the khan’s imagination or the daughter of a weaver will fill up the khan’s harem. In thought the weaver came to the shore of a deep water ditch, sat down on its edge and cried for not being able to come up with a solution. Suddenly, it rained, and the sun, looking out from behind the clouds, shone in the waters. Then the poor man’s tears dried up, he saw the answer in the reflection of the clouds and the rainbow on the question that tormented him.

Thanking the sky and the Almighty for the idea, the weaver rushed home and by morning brought a khan a fabric of indescribable beauty and lightness, shimmering in the sun with all colors. Khan lost his speech, seeing all the beauty of the fabric and only asked how it was possible for the weaver. The weaver replied that he mixed the lightness of the clouds and the sky with the rays of the sun, the green of the grass and the beauty of the flowers, adding the glitter of the eyes of his beloved daughter to create such an incredible fabric. As a result, the khan fulfilled his promise and did not marry the daughter of a weaver. The cloth was called “Khan-Atlas” and the girl was married to one of the Khan’s sons.