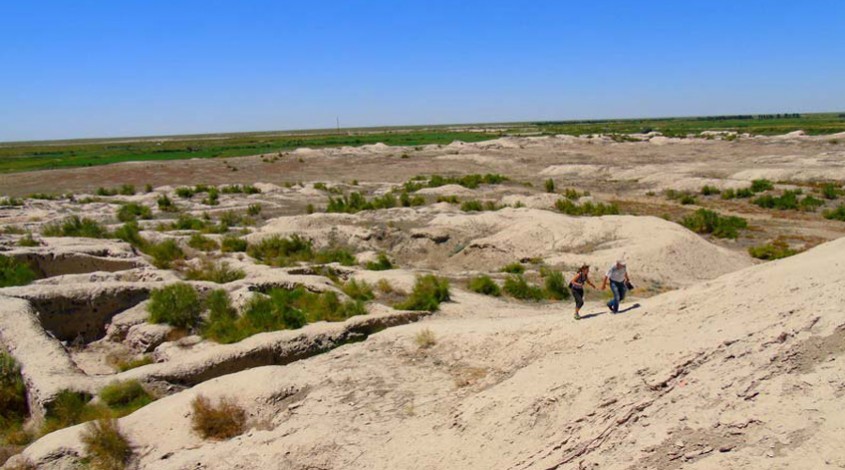 Among numerous tourist attractions beautiful Bukhara is famous for, there is a particularly interesting place, the Varakhsha Palace, the ruins of an ancient settlement of the 4th century BC. Archaeological excavations carried out on the territory of the palace have shed light on many secrets of the East. Not only experienced archaeologists but also ordinary people passionate about remote ages will find many interesting things there.

Transfixed, one can stand for a long time contemplating the details of the ancient architectural object. In those distant times, Varakhsha was a military outpost of high strategic importance.

Trade routes passed just through the territory adjacent to the Palace. Since the beginning of excavations in the 1930s, the territory of the structure that had been revealed became larger and larger.

The walls of the Varakhsha Palace are decorated with frescoes and paintings that shed light on the life of the people of that time: their craft, recreation and culture. For example, Narshakhi, the ancient historian, devoted his attention to the Palace and wrote a lot about it, so now we are able to have an idea of the size, structure and function of the fortress and the Palace itself. In the opinion of Narshakhi, at those times, the palace was the best in ancient Sogd.

This architectural masterpiece was the main monument of palatial architecture of the pre-Arab period. It is the only architectural structure of archaeologically known Sogd. The construction of the building was connected with the political situation of that time in which many independent principalities were formed, and each tried to set oneself apart from the neighbors in one way or another.

The palace was a carefully planned construction with a well-thought-out infrastructure and beautiful decoration. There were three separate halls: the Red Hall, the Western Hall and the Eastern Hall.

The passages were decorated with arches, and many clay benches were located along the walls. The walls were also decorated with large-scale drawings showing audiences with the ruler and hunting for existing and even imaginary animals.

The halls had an entrance to the courtyard that was equally beautiful. The baked brick walls were well built and decorated to match the rest of the Palace. Not many buildings have survived until now. The palace was abandoned after the death of its last ruler due to the difficulty of its irrigation and water supply systems.

The team of Canaan Travel recommends all history enthusiasts to visit the ruins of the Varakhsha Palace. Not many such unique monuments of the past millennia still exist. Uzbekistan preserves the living history of its land. Welcome!