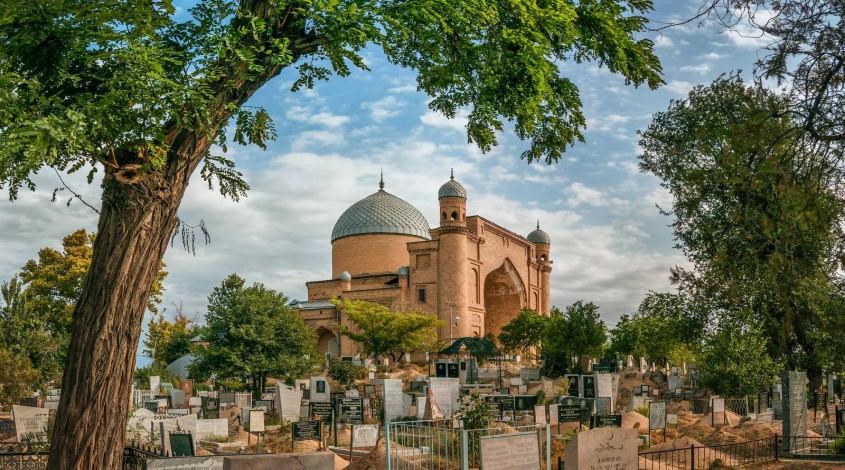 There is a mausoleum in Tashkent, in the Kukcha district, where the fortress and one of the city gates were placed back in those days. This attraction was built in the 14th century as a tribute to the memory of Zainiddin-bobo, many years after he passed away.

Zainiddin’s father, Shihabuddin Suhrawardi, founder the Sufi order known as Suhrawardiyya. The son followed in his footsteps and was once sent to Tashkent to preach Sufi teachings in the region.

That’s how he got to Kukcha, one of the ancient districts of Tashkent. Having devoted his entire life to spirituality, he enlightened the local population through lectures. The 11-12 centuries were a difficult period in the life of the peoples of Central Asia, many cities were almost razed to the ground by the armies of Genghis Khan.

During this period, the teachings of Zainiddin-bobo played a a very important role in nation building. Being a possessor of great knowledge and a piercing mind, he addressed the hearts of people in his speeches and spoke exactly the words they needed in those difficult time, which helped him to win their love. That’s why people began to call him “bobo”, which means “grandpa”.

Having lived 95 years, Zainiddin-bobo left an important mark on the spiritual history of the people.

In the 14th century, Amir Temur ordered the construction of a mausoleum in honor of the Sufi. The place for the building was specifically chosen, because there was an ancient chillachon, a cell where the sheikh prayed and lived. This is a building of the 12th century, one of the oldest in Tashkent, which continues to work to this date.

The building of the Sheikh Zainiddin-bobo mausoleum has been repeatedly restored, but its main features have remained unchanged. One of them is the crescent on the top of the dome. It was cast from lead during the construction of the building and is still preserved. Above the entrance to the building, the name of Mir-Sharab Abdu-Mumin ugli, master supervised the construction works is indicated. The design of building resembles the simplest observatory. From the cell you could observe the movement of stars. This fact became a basis for many legends. One of them says that the cell was connected with Hast-Imam Square by an underground passage. Today it is not possible to find out whether this was true or not. The cell is located on the hill which is called “Hill of the Wise Men” and one of the modern theories says that it got his name because of his secondary function – the observation over celestial objects.

It is worthy of note that some elements of the original building have been preserved up to now — for example, the brick walls of chillachons built in the 11-12 centuries.

If you want to make your vacation in Uzbekistan unforgettable, please contact Canaan Travel and we will make your visit as interesting and comfortable as possible.