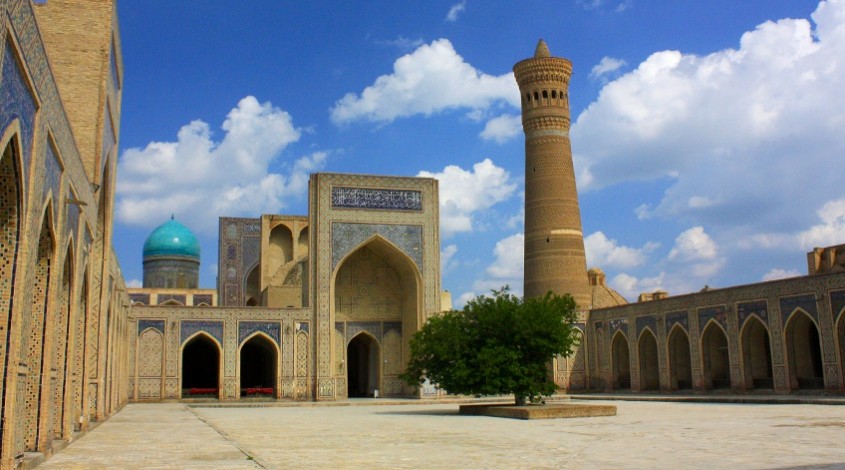 Today the Poi-Kalyan Ensemble, whose architectural monuments have been reconstructed several times from the 12th to the 16th century acquiring a new look, is one of the main jewels of Bukhara, the pearl of the Orient. The masterpiece of the art of building located on the main Registan Square like a beacon in the sands of the ancient city stands at the intersection of trade routes of four bazaars “at the foot of the Great”.

According to the old legend told by the residents of Bukhara, the ensemble was given that name because it stood near the main of its three elements — the Kalyan Minaret, a stone giant 47 meters in height.  However, there is another legend stating that the name of the ensemble is the result of closeness of the people living in the ancient city to Allah. It says that the blue domes of the ensemble are so high that they reach the blue sky of Bukhara, and the Almighty God always hears the prayers people offer in this holy place. 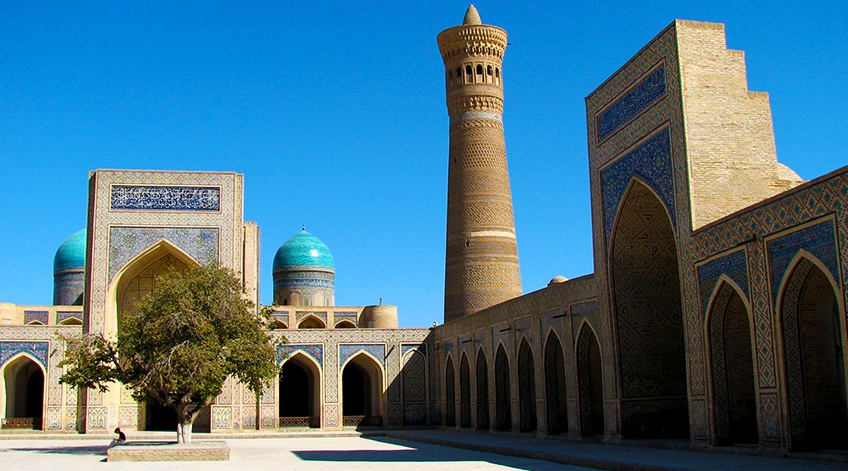 Legends that adorn this place like a sprinkle of precious stones give rise to thousands of guesses and enchant travelers from around the globe who come to visit the place. Whatever the origin of the name is, the architectural monument consisting of amazingly beautiful landmarks decorated with glaze and mosaics and elegant patterns was constructed due to Arslan Khan who ruled those lands in the 12th century.

Having planned to carry out a large-scale reorganization of the city, the ruler pulled down the city palace, restored the ancient citadel that lay in ruins at that time and relocated the city mosque. It was named Kalyan. A minaret with the same name soon rose to the sky next to it. 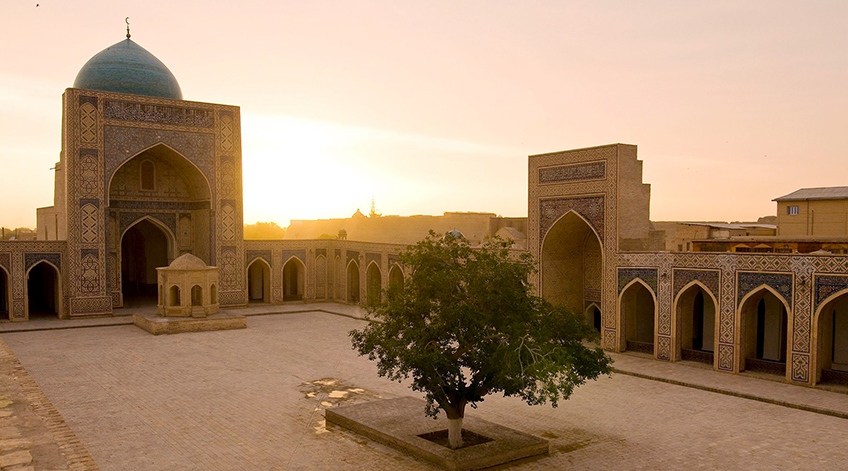 The Kalyan Mosque that delights the eyes of guests of peri Bukhara was built to replace a mosque constructed in the 16th century, under the reign of Arslan Khan, as the calligraphic inscription on the facade of the building says. Later in that century, Poi-Kalyan acquired its beautiful shape preserved until now and became an eternal home for another attraction — the Miri-Arab Madrasah.

The architectural monument was built on the ancient land of the city in the sands due to Ubaidullah Khan, who ruled Bukhara at that time, and Prince Abdullah Yemen who had come from Yemen and after his death was recognized as a saint. They both found their final resting place within the walls of the madrasah.

Canaan Travel invites guests of our land-Uzbekistan not only to rest in beautiful Bukhara, but also to go on a journey through living history — a true treasury of spiritual values and centuries-old wisdom of the people living on this ancient land.