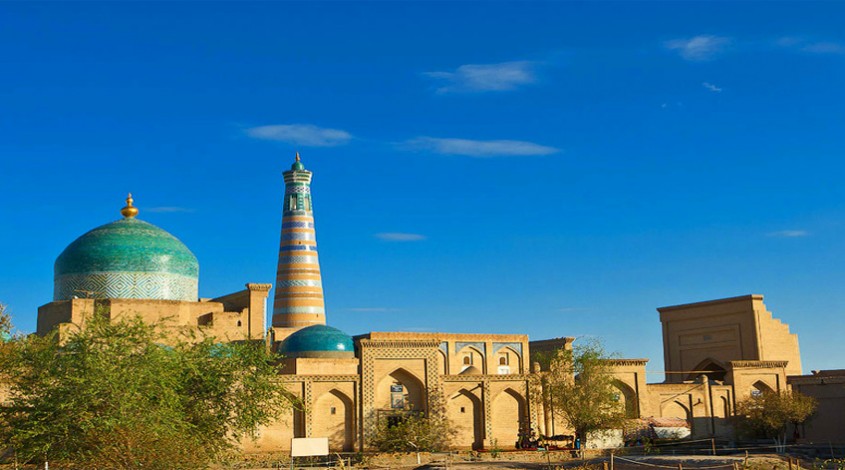 Your architecture, oh wonderful Khiva, has always been distinguished by its elegance and peculiar features. Unlike other historical cities of Uzbekistan, where blue domes are an integral element of architecture, you, Khiva, are famous for only one blue dome on all your land – the dome of Pahlavan Mahmoud Mausoleum, named after a truly legendary person.

The word “Pahlavan” means “Hero” in translation. This nickname of the craftsman Mahmoud was not accidental – professional warriors got the titles of heroes in Khorezm. It was by fighting that Mahmud earned his living, and the craft was more for the rest of the soul and to help others.

There are many legends about Pahlavan Mahmoud.

One of them says that Pahlavan lost only one fight in his life. And he did it on purpose, because he learned that his opponent would have been put to death in case of his defeat.

Another legend attributes another noble deed to Mahmoud. Speaking to the Indian sultan Alauddin, he asked him to reward the freedom of as many captive countrymen as he could fit into the skin of a cow. The sultan smiled ironically and agreed, because how many people can fit into one cow’s skin? But after the victory, Mahmoud came to a trick: he carved one long belt from the skin of one cow, which he was able to girdle all the Khoresmians who found themselves in captivity.

The strength and wisdom of Pahlavan Mahmoud was praised in songs. The hero himself was a great poet and musician, for which he was awarded the title of “Omar Khayyam of Khorezm”. His poems inspired subsequent generations.

The residents of these places, oh wonderful Khiva, say that Pahlavan Mahmoud was able to heal people from diseases. His nobility and faith made him a revered man, so after his death in the first half of the XIII century, his own tanning workshop, where he wished to be buried, became a pilgrimage site.

According to the engraving on the gates, the construction of the mausoleum was completed in 1701 on the site of the workshop. Construction of the attraction began with a small tomb, and in 1810, the building turned into a magnificent mausoleum.

As a Sufi, philosopher and educator, Pahlavan Mahmoud was recognized as a saint in the early XX century.

After that, the mausoleum became a burial place for Khiva rulers. For example, in the beginning of XX century, a two-story mausoleum with the burial of Isfandiyar Khan was built.

Canaan Travel invites you to visit the amazingly beautiful ancient Khiva and feel like you are in a real Oriental fairy tale.