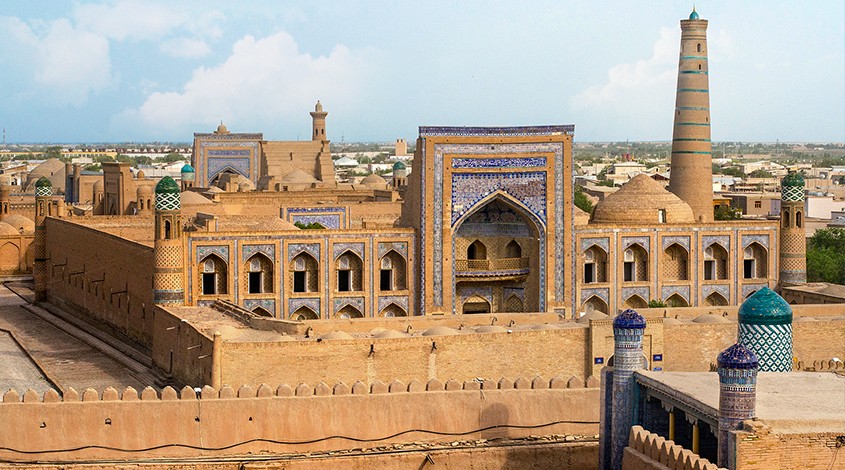 Muhammad Rahim Khan Madrasah is located not far from the majestic Kunya-Ark gates. It is one of the few big mosques in Khiva, the city which is an open-air museum itself. The attraction was built in 1876 in the western part of Itchan-Kala by Mohammed Rahim Khan II himself. He was a representative of the Kungrat dynasty, which ruled the Khiva Khanate back in the XVIII-XIX centuries.

Muhammad Rahim Khan II made a great contribution to the education of Khorezm. He aimed at the cultural development of his entourage and people; many artistic and documentary works were translated, and madrasahs and libraries were built under his rule. Under the patronage of Mohammed Rahim Khan II, the first lithographic printing house in Central Asia was launched in 1874.

He was an outstanding ruler and an original thinker. In addition to Islam and the Quran, he studied such sciences as mathematics, astronomy, and geography, which he himself taught his students. He was a great admirer of poetry and even himself was the author of many works. He wrote his poems under the pseudonym of Feruz and tried to imitate the great poet of the East, Ali-Shir Nava’i.

Besides, the ruler was famous as a composer.

Muhammad was very easy-going when communicating with his people; he often participated in discussions with his students, trying to prove his point by examples taken from his life.

The idea of building the madrasah was fulfilled in 1876. Muhammad was delighted that everything turned out the way he wanted. The madrasah was a two-level building with a high portal, which is located at the entrance to the madrasah. The hall of the mosque consists of 8-dome sections of the crank aisle.

There are four iwans made of the best wood in the madrassah. All wood carving was made by hand. If you take a good look at it, you can see traces of the real history of that time, which has reached our days.

There are 76 hujras inside the madrasah, which are living spaces for recreation and accommodation of students. Thanks to its structure, the madrasah allows training both in winter and in summer. The large library also testifies to the opening of a new educational epoch in the Khiva Khanate under Muhammad Rahim Khan II, which left a huge trace in the history of the Khanate and Uzbekistan as a whole.

Canaan Travel invites you to visit Uzbekistan and wonderful Khiva and enjoy all the beauties of this place.