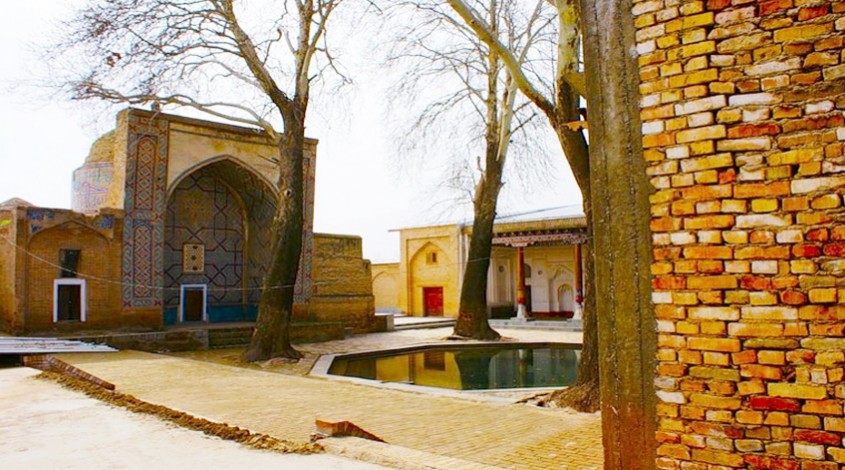 The mausoleums of Abdi Darun and Abdi Birun are two attractions located in completely different parts of Samarkand. The first one, whose name can be translated as “the inner one”, is located inside the old city, within the city walls. The name of the second mausoleum means “the outer one”; it is located outside the city. There is a dome above the grave of Khoja Abdi, the descendant of caliph Osman. The Abdi Darun ensemble began with it. Three centuries after his death, a mausoleum was built above his remains.

Today it all has grown into a complex constructed around the haouz, a reservoir located in the center of the courtyard, which is the physical and spiritual center of the ensemble. On the north side there are several rooms, hujras, and opposite there is the grave, to which in the 15th century they added the ziyaratkhona. On the western side, there is a high iwan — this is a mosque.

The carved ceiling of the iwan is a traditional decoration in Samarkand. The interior of the building is decorated with mihrabs and mosaics placed in the form of medallions. The courtyard is full of vegetation, which is very useful on hot summer days. Travelers who have come a long way to the mausoleum can refresh themselves by the haouz, in the shadows of the trees.

Completeness of the architectural idea together with vegetation in the courtyard evoke a sense of unity with the spiritual fullness of the complex. Therefore, the flow of pilgrims coming from various parts of Uzbekistan never ceases. Outside the Samarkand fortification, beyond the borders of the old city, there is the “outer” Abdi Birun.

The son of Abdi Darun, a man who was a highly respected person during his lifetime, is buried in this place. People say that being a judge he returned extremely fair and competent verdicts. The mausoleum is part of the group of large Central Asian complexes. The khanaka and the burial chamber form the basis of the complex.

Khanaka is a domed room with stairs at the corners. The crypt is located in a fenced yard. There is also a small haouz next to the burial place. It is much smaller than that located near the remains of Abdi Darun. The trees are also much younger than those surrounding the pond of the father. Nevertheless, this complex equally attracts attention of faithful Muslims.

Canaan Travel invites you to visit the great city of Samarkand, whose history goes back thousands of years. The unique historical monuments of this city provide an opportunity to touch the culture of the magical East. With us, you can be sure that your vacation in our country will be unforgettable.