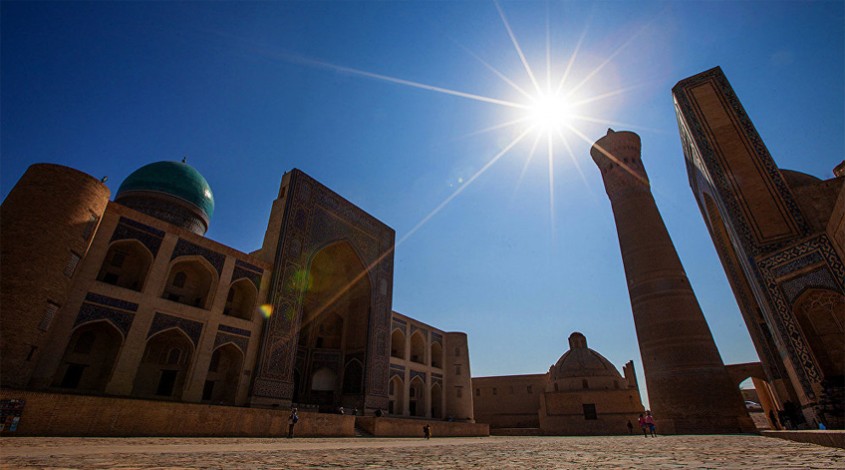 It is impossible to imagine the beauty of Bukhara without the beacon showing the way for the caravans travelling along the Great Silk Road in the sea of sand — the Kalyan minaret. A true stone giant that is almost 47 meters high rose to the sky in the 12th century. According to a legend, Genghis Khan bowed down before that giant made of burnt bricks to pick up his helmet that had fallen on the ground. Having seen that, the warriors of Genghis Khan decided that it was no accident and repeated everything after their leader. At that moment, the fearless conqueror realized that for the first time in his life he was bowing down before something. The minaret still attracts the attention of visitors coming to this ancient land and has become its symbol.

Bukhara, like Scheherazade in the tales, generously shares its legends with the guests and has another interesting story. It tells us how this architectural monument was constructed. At that time, Arslan Khan, Karakhanid ruler of those lands, decided to invite the most famous masters to the city and choose the best one among them; master Usto Bako had the honor to build the minaret. First, everything went according to the plan drafted by the ruler: Usto laid the 16 meters deep foundation for the projected stone giant on the site chosen for its construction. However — lo and behold! — after that the architect disappeared without leaving a trace. Furious Arslan Khan ordered to find the fugitive and execute him, but all searches proved to be fruitless. 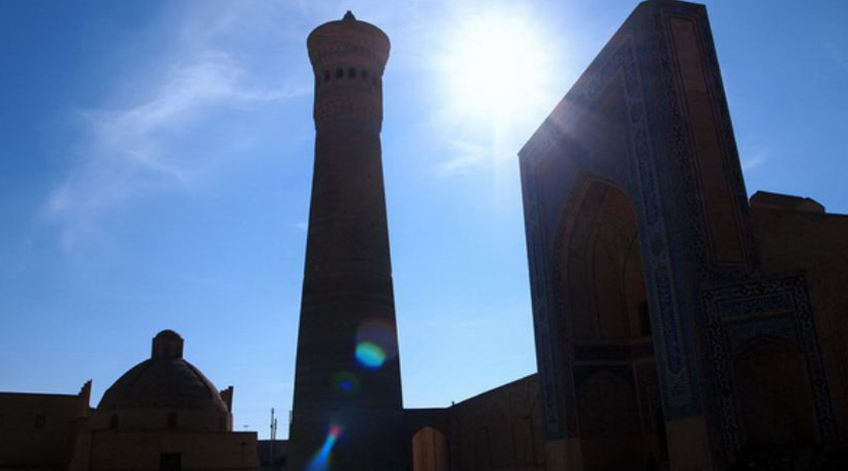 Only Usto Bako himself shed light on his mysterious disappearance when two years later he returned to the ancient city as suddenly as he had left it. Before starting the construction of such a high attraction, it was necessary to wait for the foundation to settle well.

Probably this is the reason why this remarkable sight was able to preserve its pristine beauty for eight centuries and not to turn into ruins. The walls of the ancient monument impress with the elegance of geometric patterns; its Kufic inscriptions are filled with the wisdom of the centuries. If you look to the top of the monument, you can see stalactites of unprecedented beauty.

Another local legend states that many centuries ago people condemned by the khan and unfaithful wives were thrown from the minaret that was called the Tower of Death. When an evil Shak decided to execute his innocent wife, she asked to fulfill her last wish — to let her put all her dresses. People who gathered below the minaret froze when she jumped off. Whether the story is true or false, people say that she was saved from inevitable death due to her dresses that had caught the wind like sails.

Now the minaret greets the guests of present-day beautiful Bukhara with a call of prayer. Righteous Muslims offer their prayers to the Almighty God in the mosque bearing the same name that is located next to the minaret and was built to replace the old one that had turned into ruins in the 16th century. The multi-domed gallery of the building is decorated with 288 domes supported by 208 pillars. The courtyard of the mosque is surrounded by four iwans — a place for rest of travelers in the summer heat and for a visit for meditation during prayers.

Together with Canaan Travel, guests of Uzbekistan who head for the ancient lands of Bukhara will be able to fully immerse themselves in the unique spirit of this place, recharge with its energy and see for themselves how beautiful and perfect architectural objects can be.