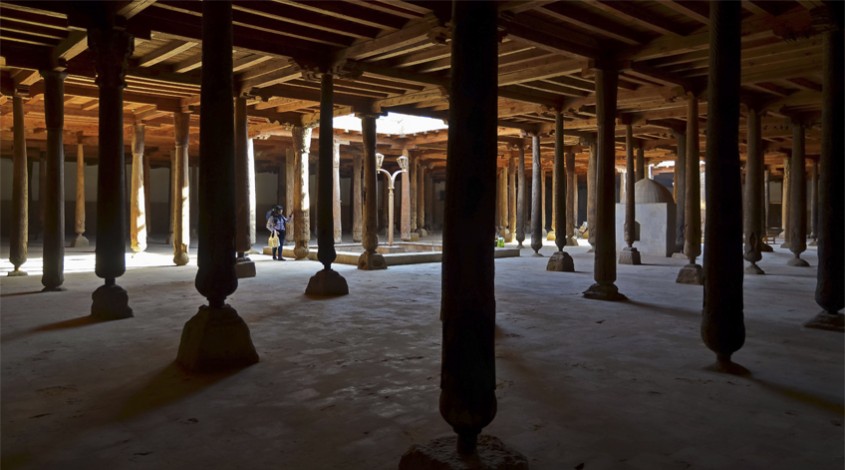 Oh, wonderful Khiva, an open-air museum, you amaze with the beauty of your attractions. Your mosques are beautiful and unique. Jama mosque on your land, in the heart of legendary Itchan-Kala, is not like any other mosque.

While other mosques are glorious for their arches and portals, your Jama Mosque has not only them, but even traditional domes. But the most unusual and visible place in this building is, without doubt, the prayer room. This is an amazing work of art of Oriental architecture: it has the roof based on more than two hundred columns of different heights.

The columns were made at different times and kept woodcarving styles of different epochs. The oldest of them dates to the X century, and the newest one – to XVI century.

Each craftsman constructing a new mosque column treated the predecessors’ works with care and great respect, so the continuity bordering on innovation can be traced in the carving.

Many of the columns were not made specifically for the Jama Mosque, they were borrowed from other buildings or even became war trophies. Each column is unique and has an inimitable carving. You can admire this fine work for hours.

You covered the beginning of the history of this landmark with mystery, oh wonderful Khiva. Some believe that the mosque was built in the X century, and was reconstructed at the end of XVIII century. Another version says that the X century mosque was a completely different building, more ancient, but was later destroyed. And that in XVIII century, the Jama Mosque was erected in its place. Anyway, we all owe your new look to Abdurakhman Mikhtar, the servant of Khiva Khan, whose money was used to start the construction.

Your magnificent mosque is not just designed to gather people for common prayer, oh wonderful Khiva; it literally helps people to find spiritual unity. Light enters the building only through the hatches in the ceiling, and it only suffices for the poor lighting. The room, immersed in a meditative twilight, helps prayers find new words and thoughts, merge with the spiritual world.

The mosque has three entrances, but the central one is especially remarkable: it is a wooden door with fanciful carved patterns, which is at least seven centuries old, and connects the inner part of the building with the central and straight Khiva street.

Canaan Travel advises all guests and residents of Uzbekistan to visit this place. Khiva has prepared all conditions for your unforgettable holiday in the fabulous East.