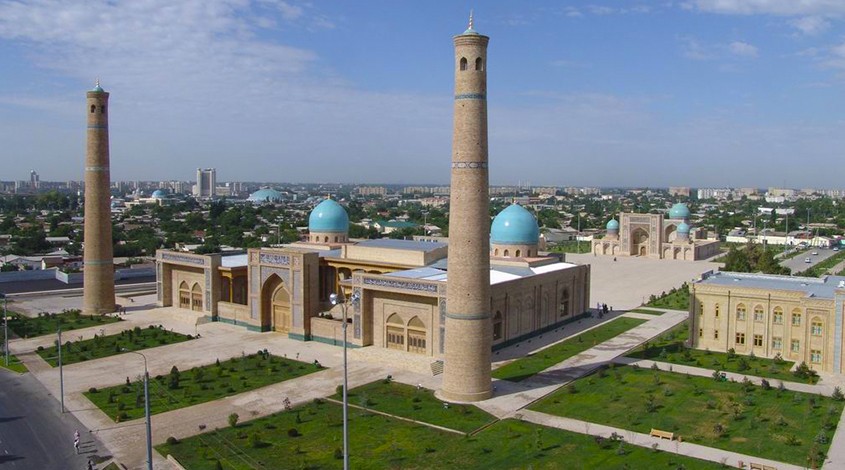 In Tashkent, the capital of Uzbekistan, despite the whole modern look of the city, there are also various historical places, the age of which is measured by centuries and some by millennia. The ensemble of Hazrat Imam was founded on the grave of an oriental scholar, poet, and religious expert and was named after him. According to historians, he was buried on the territory of Sebzar settlement, which is now part of Tashkent.

Now the whole area where the complex is located is named after Hazrat Imam. At the base of the ensemble, there is Barak Khan Madrassah, which consisted of Suyunijkhan Mausoleum and Nameless Mausoleum, united in the 5-6 centuries. Tilla-Sheikh Mosque, built in the 19th century, is situated opposite Barak Khan. There is also a very interesting library, which contains manuscripts from the East of different times. In the 16th century, the attraction was built over the burial place of Muhammad Abu-Bekr Kaffal Shash, a representative of spirituality. This place has been preserved to this day and is considered an architectural monument.

A rectangular shape with a high dome on a conical cylinder, walls made of thin strong bricks, and the inner part of the walls keeps a belt of inscriptions with majolica. It’s an extremely interesting wall decoration. The inscriptions contain information about the construction, name of the architect, and date of the mausoleum construction – 1541-1542. Later a prayer room was built, namazgoh, which is also part of the ensemble. Mirzaahmed-Kushbegi, a khan from Kokand, financed the construction. The building is rectangular in shape, like the adjacent mausoleum, but its roof is topped with twelve domes. In the 1970s, the Al-Bukhari Institute of Islam began operating within the walls of this building.

Later, the old building was demolished and a new one was built. In addition, the complex includes a madrassah with an interesting name Mui Muborak, which literally means “Golden Moustache of the Prophet”. This is where the world-famous Holy Quran of Khalifa Osman is kept and protected. It is believed that this is one of the first copies of the Muslim holy book, with which was later duplicated. This Quran dates back to the 7th century AD. It’s written on the hide of a deer.

Previously, there were only six such books in the world, but at present there are only four. Two of them are in Uzbekistan, one in Mui Muborak and the other in the Timurid Museum, also in Tashkent. In 2007, the building of Hazrat Imam Mosque was rebuilt. Architects built it in the spirit of the 16th century, nowadays there are two minarets and blue domes. The mosque has many works of woodcarving masters exhibited under the iwan in the gallery. Different trees and vegetation from different parts of Asia were brought here, which now grows in the mosque building. Here you can see storks walking in the yard on warm days.

Canaan Travel will be your personal guide to Tashkent, will advise you on the best places for rest and leisure, will take all the care that you need only to visit and enjoy the charming beauty of the city!