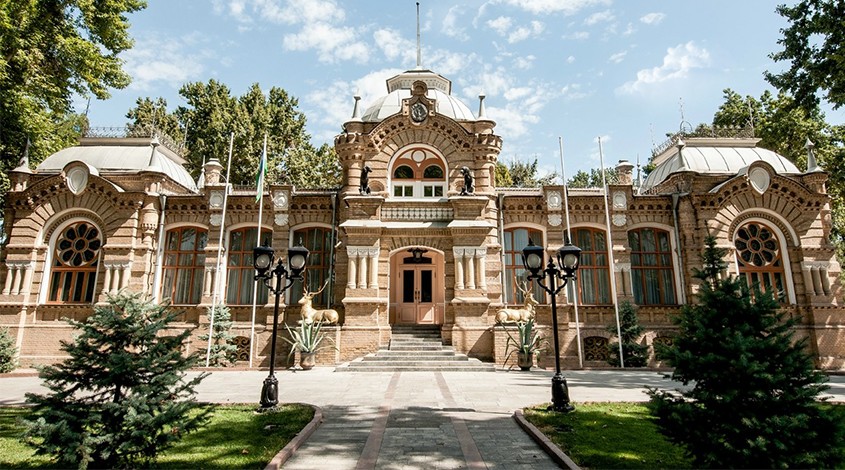 In the heart of the capital of Uzbekistan, in the city of Tashkent, next to Independence Square, there is one attraction, different from all others in our Republic – the former residence of Prince Nikolai Konstantinovich Romanov, who lived from the mid-19th century to the early 20th century. Nikolai Konstantinovich was sent to Uzbekistan on a mission to mine gemstones in Turkestan region.

10 years after his arrival in the Turkestan region, according to the plan of architects L. Benoit and V. С. Heinzelmann, the work on building a residence out of the best bricks of that time was started. The building in the basement was specially equipped for housing. On the right side, there were the apartments of Romanov’s wife, and on the left – a place for rest and leisure of Nikolai Konstantinovich himself.

There was a kitchen-dining room in the same room. Outside the residence, huge towers were added, which only improved its appearance. A green garden was laid out around the palace. On the two sides of the stairs that led inside the palace, on the marble plinths there were bronze deer statues with branchy horns. Outside the palace was decorated with metal grilles and other many original elements of decor. The windows of the palace have different shapes – a strict square, rectangle, and even a circle.

The interior is even more interesting from the inside. The walls of the guest room were covered with natural wood, clippings and gilded inscriptions decorated the cornices. The residence has a huge library, a real living greenhouse, which included extraordinary plants and flowers, and a Japanese garden, similar to which another one was later built near the residence.

Romanov set up a personal small zoo with various species of mammals, birds, amphibians, and reptiles that could be found in the territory of modern Uzbekistan. Every Sunday any citizen of the city could come and admire the collection collected personally by Nikolay Romanov.

Today, this landmark is of interest to everyone who visits Tashkent, the Star of the East. Canaan Travel team is happy to open this unique building to you and share with you an amazing history of the whole city.