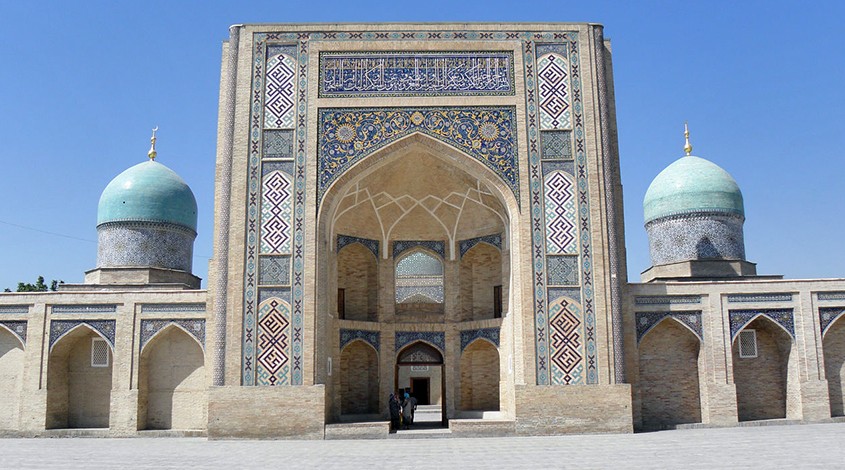 There is an unique district in Tashkent known as the Old City. It can be rightfully considered as the center of the history of the Uzbek capital, since there are many architectural monuments which have huge spiritual and historical value.

One of them is located near the Chorsu Bazaar and near Hazrat Imam Square. The madrassah was named in honor of Barak Khan. The construction took place in several stages, that’s why it was completed only by 1532. At the first stage, the construction of the Nameless Mausoleum began. It has four rooms in total, and due to the layout of the rooms the main hall is cross shaped. There is a story that this mausoleum was the residence of the Supreme Mufti of the Muslim Office of Uzbekistan.

At the next stage, the Suyunji Khan Mausoleum was built. The entire complex is made of unusual ragged brick. Nobody knows the reasons for this, but it looks amazing. The entrance to the mausoleum and its dome are brightly decorated. It is considered that earlier the dome was covered with beautiful stones, and its interior was decorated with an eight-pointed stars ornament. Therefore, the mausoleum got its second name, Kuk Gumboz, which means “blue-domed”.

It is not possible to confirm or refuse this story, because the dome collapsed due to an earthquake in 1868. The inside part of the madrassah represents courtyard surrounded by hujras. All of them are single-story. The madrassah is made in the form of an elongated trapezoid around the courtyard. There are burials inside the madrassah that appeared long after the construction of the attraction itself. As for the organizer of the construction, Barak Khan himself, he was buried in Samarkand in 1556.

The modern life here looks a little different. A new building of the Barak Khan Madrassah, which became the new residence of Muslim Administration, was built. All hijrahs were reassigned into workshops for craftsmen. But this does not mean that the spiritual heritage of the madrassah was lost.

Masters make book ends for Quran reading, as well as various products decorated with the Quran extracts. Chasers make dishes decorated with minted vitriolic patterns. Therefore, despite the fact that part of the madrassah has already been lost by now, and another part has been modified, nevertheless, even today you can find here a lot of interesting and useful stuff for yourself.

If you going to visit Uzbekistan, entrust your vacation to Canaan Travel and we will turn your trip into a true adventure to a magical East.