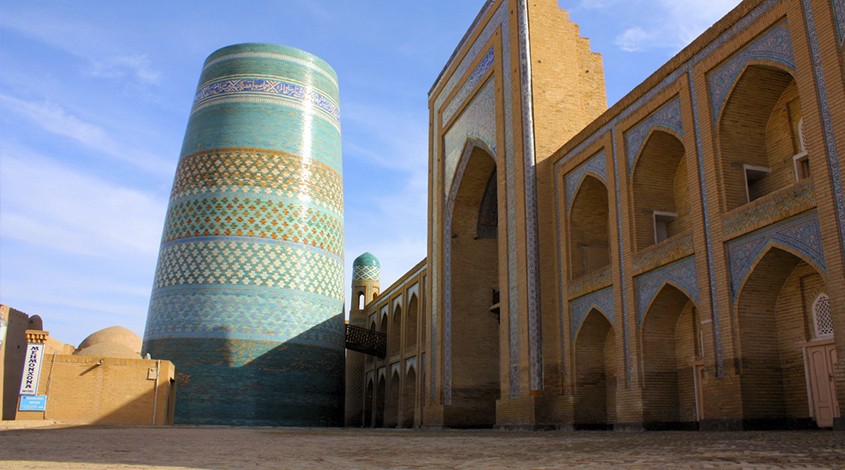 Muhammad Amin Khan Madrasah is a wonderful sight, from which visitors all over the world will recognize you, oh wonderful Khiva. This building is a vivid example of Oriental chic and the desire of the ruler to immortalize himself in history as a builder of the largest and most beautiful complex. Like many other objects of Khiva, the monument is included in the UNESCO World Heritage List.

Muhammad Amin Khan, the ruler of Khiva lands from the Kungrat Dynasty, wanted to create the most beautiful madrasah in all of Khiva. And he managed to make his dream come true: the building became one of the largest not only in Khiva, but also in the whole Central Asia. Although some buildings here were never destined to be completed, as the life of Muhammad Amin Khan was tragically interrupted.

In 1852, the ruler laid the foundation of the grand minaret, which was to become taller not only than other attractions in the East, but also than all other buildings in the world. However, Muhammad Amin Khan died in the battle with the Turkmen army in 1855. And as his heart stopped, so stopped the construction. The minaret of the madrasah has never been completed, its height was 29 meters, although it was originally planned that it will be over 70 meters high. A foundation with a diameter of 14.2 meters would allow the giant structure to stand still.

The minaret was named Kalta Minor, “short tower”, as if mocking unfulfilled plans. But even such a combination of circumstances was favorable, as the minaret is not like any other in the world. Another distinctive feature of Kalta Minor is its unique design with maiolica and glazed tiles with Arabic calligraphic inscriptions.

The dimensions of the madrasah are 60 by 77 meters; there are 125 hujras inside the building, each of which is divided into two parts, which is very unusual.

The two-storied madrasah was located in an all-time prestigious place in Khiva, at the western gates of Itchan-Kala. It turned out to be the first madrasah where accommodations for students were organized. This madrasah was one of the self-sufficient and wealthy institutions, which had its own income and large property. Nowadays, the building houses a hotel, a travel agency, and a cafe.

Canaan Travel invites travelers from all over the world to Khiva, the wonderful city of Uzbekistan, which keeps the secrets of ancient Asia and the inexpressible spirit of a real Oriental fairy tale. We will make every effort to make your visit to areas of Uzbekistan truly unforgettable.