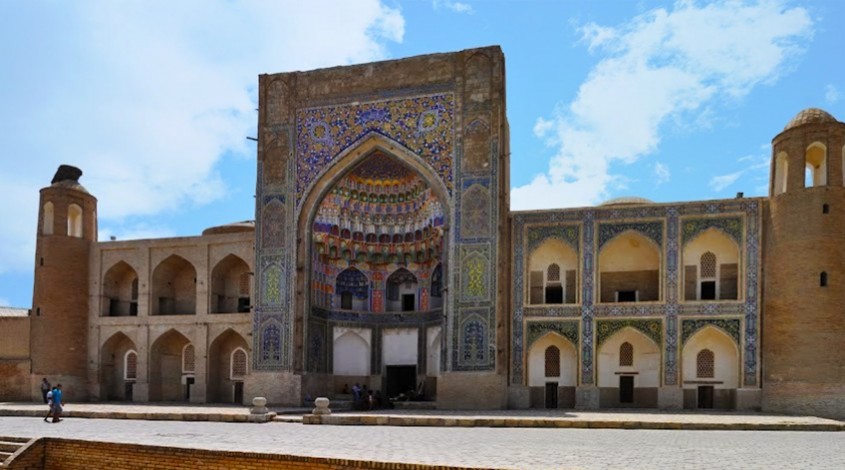 The madrasah of Abdulaziz Khan was built in Bukhara in 1652, 235 years later than the Ulugbek Madrasah. Contrary to tradition, it becomes a part of the architectural complex without inheriting the design of the attraction that had been constructed earlier. From the very beginning, it was planned to create a luxurious madrasah that would absorb the skills of the best architects of that time in order to amaze and delight people with its beauty and decoration. According to available information about that period, Abdulaziz Khan was known for his bravery and generosity. It is equally important that he was a lover of science and education. This is confirmed by the fact that one of the most beautiful libraries with manuscripts was collected during his reign. Another evidence is the madrasah build by his order.

The entry portal is a particularly remarkable part of the madrasah. It is not only large but also decorated with an incredible ornament. Two floors of arches are typical for a madrasah, but the decoration strikes the imagination. The second level of ogival balconies is made in the form of numerous niches decorated with paintings and ornaments. The same ornament leads your gaze the top of the ogival arch, which gets smaller and more elegant with each new level. The side parts of the main entrance are only half decorated. This is because when Abdulaziz Khan was absent, an uprising began in the city, and although it was suppressed, it prevented the masters from completing their work. Therefore, the main entrance remained unfinished.

Two towers in the corners also do not have any bright colors. However, even the part that had been finished gives an idea of the skills of masters living in that time. There is an interesting fact: for the first time in the history of Central Asian architecture, yellow paint was used for decoration. Previously, masters used only dark blue, blue and russet colors. 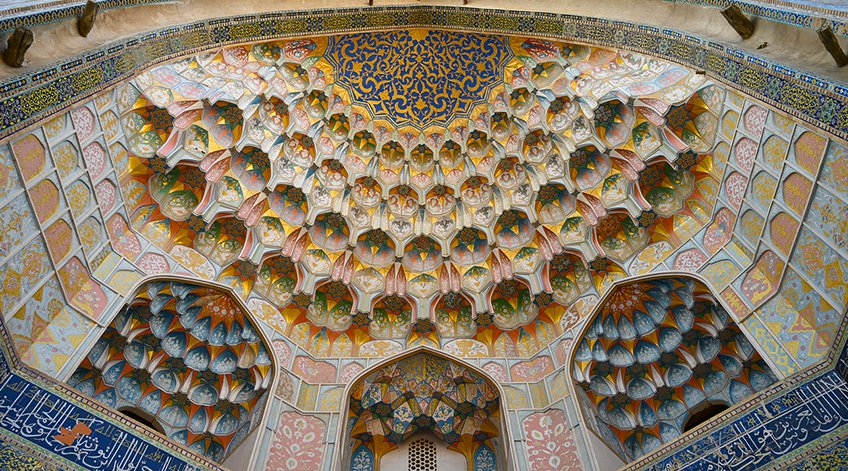 Carved tiles, relief majolica, various types of stones, marble, plasterwork and many other elements are gilt-embellished. Each detail catches the eye due to its unusual structure or design. There is another amazing fact: the ornament of the madrasah consists of the images of flowers, animals and birds. You can even find landscapes with dragons and trees. This is also not typical for traditional ornaments. That clearly shows that Abdulaziz Khan actively supported trade and cultural relations with all the states participating in the Great Silk Road.

The two mosques in the madrasah are luxuriously decorated, and ornaments entirely cover their walls and ceilings. On open mosque is used in summer and the other mosque is used in winter, so that the worshippers could feel comfortable in any season. Today, there is a souvenir shop in this place, and tourist can buy many interesting things there.

The Canaan Travel Tour Operator is ready to open the gates to Bukhara, the world of living history, for visitors from around the globe. There is no better rest than learning, so welcome to Uzbekistan, and visit the land of amiability and unique monuments.