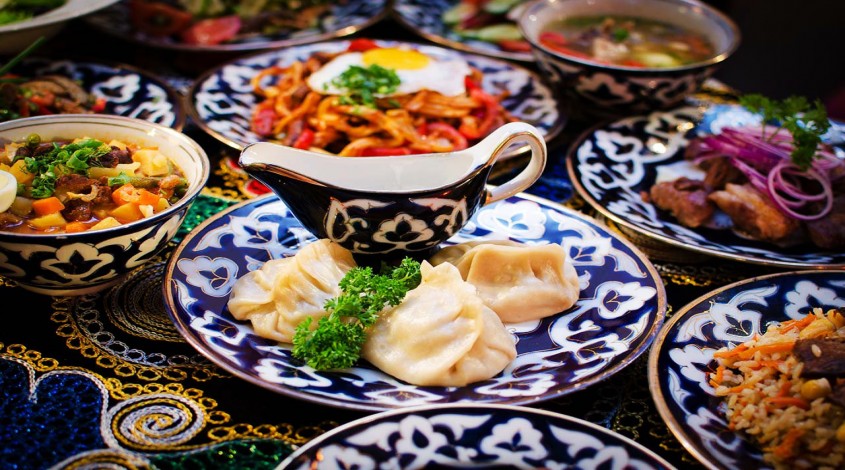 Along with the cultural aspects of each nation, there are also features present in national cuisine. This is influenced by many factors and depends on what is growing and found in the region, which trade-routes pass through the country, depends on the taste, composition and technology of cooking. Since ancient times, every ruler, returning from another military campaign, along with precious items tried to bring agricultural goods, and cooks, in turn, sought to transform these goods to something unusual to surprise and please the ruler. Very often it happened that from crusades, along with exotic products it was brought cooks who made food according to their traditions.

During a large feast, Shurpa is one of the most common soups served on the table, lamb with vegetables, fatty and rich broth captivate its aroma. Along with shurpa, people in Uzbekistan like to cook Lagman. This dish is not originally Uzbek, but has been cooked in Uzbekistan for a long time. Its recipe was brought here from China, Xinjiang province. Lagman is a long-rolled noodle, which is boiled and served with vegetables in meat sauce. However, the main dish on Uzbek table is rightfully Pilaf. 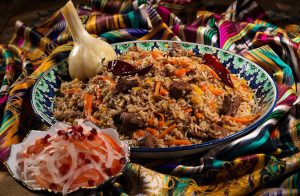 Pilaf is a dish for any occasion, be it a wedding, a holiday, just a family celebration, pilaf is always relevant. There is a version that the beginning of cooking Uzbek pilaf on the territory of Uzbekistan falls on the period of conquest of Sogd by Alexander the great. According to the legend, during the protracted campaign, the only provision for Alexander’s army was rice. One of the soldiers shot a sheep, which was put on food in the pot with rice. The cook added the seeds of the steppe grass as a seasoning and cooked a dish with which the detachment was fed. In Uzbekistan, pilaf is called Osh, which means – food. Once this dish was available only to Emirs, and the plebeian ate pilaf exclusively on major holidays. 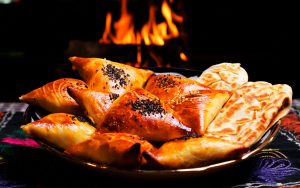 Another popular Uzbek dish  – Samsa. This is a dense or puff pastry, which is wrapped in a special way filling of juicy onions, pieces of meat and lamb fat, seasoned with spices. Just stuffed with potatoes and onions, or pumpkin pieces. Everything is prepared in a closed tandoor (special clay oven). Similar in composition but differ in way of cooking the dish – manti. Meat filling with onions, potatoes, and spices, but prepared with water vapor. Another very popular dish is – kebab. It is prepared from mutton or beef, strung pieces on long skewers mixed with pieces of lamb fat, exclusively on hot coals. Jigar-kebab(skewers of liver) is highly appreciated. 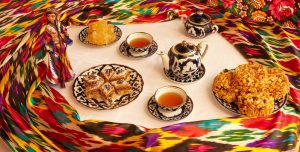 There is quite an interesting tea ceremony in Uzbekistan. Traditionally, the hostess, setting the table, brings a kettle with freshly brewed tea. Then, pouring into a bowl pours the tea back into the kettle. This procedure is performed three times before the tea is served to the guest. Due to this, the tea is well brewed, saturated with oxygen and making the tea leaves mixed are whipped and give all their taste and aroma to the water and the tea acquires a rich color. Only after that the hostess pours tea to the guest and extends it with the left hand, the right one has to be put to the heart. Tea is poured into a bowl only half its volume. It is believed that this will not allow the guest to quench his thirst quickly and make him stay longer at the table. Tea is served with delicious bread made in a tandoor and sweets. The variety of sweets in Uzbekistan amazes with its abundance: halva of different kinds, navat, parvarda and glazed nuts.