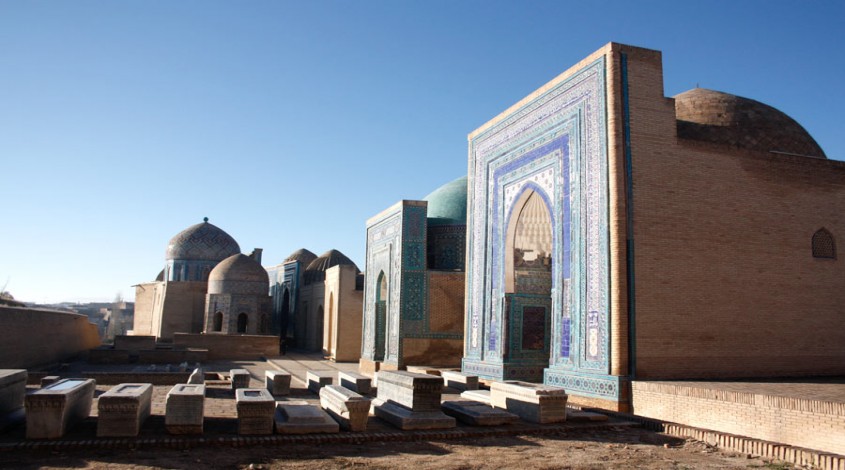 The history of emergence of a Legend About Shakhi-Zinda is closely connected with i Arabs (8 century) invasions of Samarkand. Arabs brought not captured and devastated earth, but also brought new religion – Islam. The word «Shakhi Zinda» in a translation from Arab means «Alive governor or a sheikh». And this name is not accidental!

According to a legend: Prophet Mohammed had cousin Kussam ibn al Abbas, a governor of Mecca which was appointed with a small part of armies to Samarkand for the statement and Islam distribution, the Prophet sent him as his envoy. He was violently killed, when he was praying he was beheaded. However, as he related to a sacred branch, he didn’t die, he took his chopped off head in hands and went down in a vault, and enjoyed water of life from an underground source which gave him immortality. Believing to this legend he remained in that place where he lives up to present time. This vault represents a paradise, with a fine garden, fragrant flowers and exotic birds. The paradise which has disappeared deeply underground, was and is today in the territory of a Necropolis Of Shakhi Zinda. Made room it is considered sacred. This place attracts guests and pilgrims from all over the world.

The legend says: Who will visit twice a site of ancient settlement of Shakhi Zinda, with its mausoleums and the main complex necropolis of Kussama ibn al Abbas, that person will be cleansed of sins, as all committed sins will be forgiven from heaven.