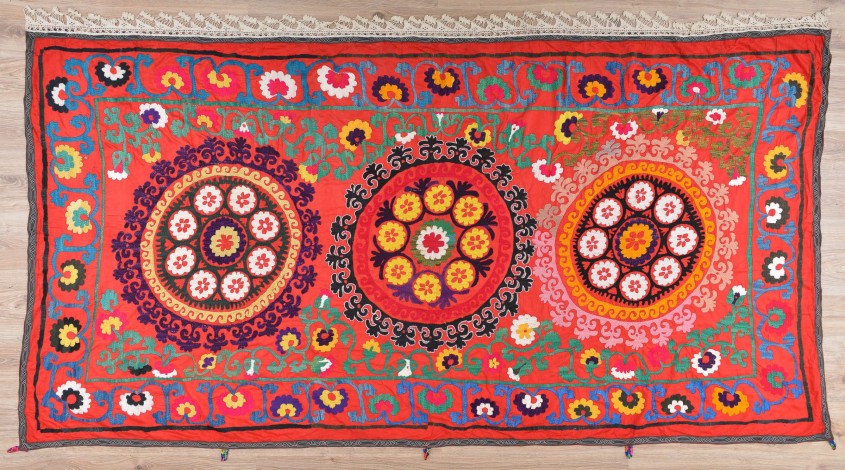 According to the ancient tradition, the pattern on the suzanne should not be fully embroidered. So the daughter will be healthy, and the wedding will never end! In fact, suzane is an integral part of Uzbek culture, which protects families from harm and serves as a symbol of a large family.

Suzane is a hand-embroidered wall rug or bedspread, and those who embroider these canvases are called Suzandozi. It is generally accepted to consider the 18th century as the time when the art of suzane was buried. However, according to some historical records describing the decoration of one of Tamerlane’s palaces, the first elements of suzane appeared in the 15th century. In most houses in Uzbekistan, if there is an embroidery-panel suzani hanging on the walls, then certainly in a compositional form, for the most complete perception of all the beauty of embroidery. To decorate a room on holidays or important events, suzane is used as bedspreads, and each type of suzane has its own purpose. Blankets and pillows stacked on top of each other in the house opposite the entrance are covered with takyapush embroidered linens.

The largest suzani with an area of ​​2×2 meters are created before the festive events. As a rule, girls start embroidering suzane at 10-14 years old and must complete the pattern before their wedding day. By the way, the girls do not embroider the carpet completely: part of the pattern remains unfinished and symbolizes the change of generations, the bride’s desire to have a daughter who will continue her business.

They also use suzane embroidery on pockets and peculiar cases for various little things used in everyday life, for example, for combs it is called shona-khalta, and for scarves that men girdle – chorsu, there are also cases for mirrors – oyna-khalta. 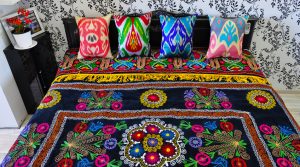 For a long time, wedding ceremonies are not complete without embroidery, the suzane was laid on the bed for the newlyweds, covering them with a sheet with embroidery – ruijo and pillows – bolinpush. There is a belief that this is a kind of amulet for newlyweds, capable of protecting them from the evil eye and evil spirits. Traditionally, only women embroider, as well as the secrets of certain patterns are passed from mother to daughter. The completion of one canvas takes on average about one and a half to two years. For this reason, the dowry began to be prepared in advance, sometimes already from the childhood of the daughter.

The creation of the pattern was the task of the draftsman, who was present in almost every district. The color range of patterns has up to fifteen color shades, which creates that incredible, eye-catching ornament. But all the colors of the picture are selected as close to natural as possible, so the flowers are usually bright in color, in red tones, while the foliage is traditionally green. Olive or sand-colored, usually branches, edging on leaves and stems. Of course, a combination of several colors is also used to add variety and saturation to the contrasts of patterns. The concept of any pattern embroidered on the canvas is based on a plant theme, in the form of a blooming garden. 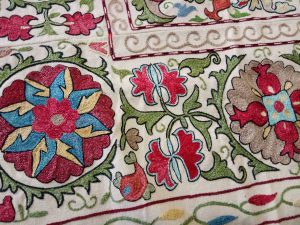 Even animals are depicted with patterns of foliage and branches. This is a kind of expression of wishes for goodness, prosperity and fertility through the patterns of the canvas. Also, sometimes the embroidery is decorated with a tumor – a kind of amulet, inside which a prayer, written on paper or fabric, folded in a special way, from the evil eye and damage. Until the twentieth century, the most common basis for embroidery was a dense red or white fabric. And later they began to use fabrics of other colors, silk green or purple, white and colored cotton fabrics. Since the craft was widespread throughout Uzbekistan, in each region, special patterns and embroidery techniques peculiar only to it were formed. And with the opening of schools in these regions, they began to divide embroidery into Tashkent, Bukhara, Samarkand, Nurata, Urgut and Shakhrisabz.

Nuratinskaya strongly stands out for its brightness and clarity of the pattern elements, the saturation of the color gamut and the geometry of the pattern. The composition has a close character, with large bouquets located in the corners and a clear eight-pointed star in the middle. Also popular is the diamond pattern grid of jagged leaves. The grid cells are filled with patterns of flowers, plants, animals and birds. There are also embroideries with a staggered arrangement of pattern elements. 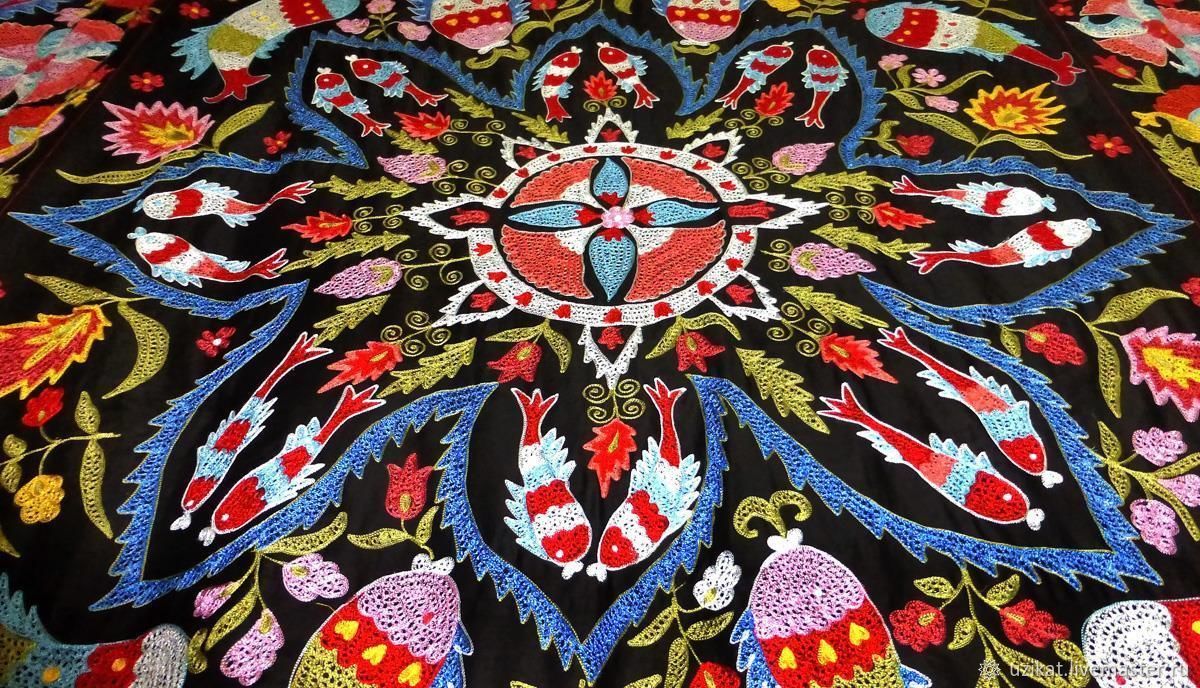 But Bukhara works are considered to be the most impressive in terms of richness of execution. All those skills of artists that have been formed over many centuries are reflected in the ornaments of the suzane. The dominant part of the ornament is the middle in the form of a round rosette with a pattern. The main feature is the chain stitch, and many colorful threads, lilac, pink, azure, yellow colors. Joinamosi prayer rugs are sheathed, as well as other household items, pillow covers and more.

Samarkand is considered one of the most advanced in many spheres of art. The art of suzane embroidery did not pass him by either. In many elements of the patterns of Samarkand masters, the historically formed handwriting of ancient Sogda can be seen. Large ornamental elements and clear lines, a fundamental round rosette of red-crimson color, surrounded by rings of leaves, this is exactly what distinguishes the patterns of the Samarkand style.

Until the beginning of the last century, the central part was filled with an ornament in the form of many multi-colored rays, but the later works of Samarkand embroiderers have changed a lot. Large elements now dominate, contrasting with each other in bright colors. 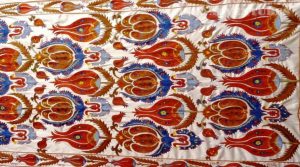 In the Samarkand region, there is the city of Urgut, in which the art of suzane is well developed. And even here, seemingly in the vicinity of Samarkand, but there are also peculiarities in the ornaments. In Urgut, household items, such as dishes, are more often used in ornament elements. Sufficiently dense embroidery creates a continuous pattern, where the white background of the canvas does not play an essential role, only complementing the image conceived by the master.

Shakhrisabz has its own traditional embroidery elements. Suzane embroidery was used to decorate tablecloths for presentations to noble persons. Traditionally, a medallion was placed in the center, and quarters of it in the corners of the tablecloth-carpet. The works were distinguished by small intricate patterns, rich colors. Many embroiderers made such a dense one to decorate their own homes. Traditions have survived to this day. The local embroidery made with a chain stitch is incredibly attractive. However, small items, cases, wallets and belts are sewn in a different way, with the “iroki” seam.

There are also many suzane embroiderers in the capital of Uzbekistan, but the style of their work largely absorbed the styles of other regions. One of the special embroideries is the palyak. It looks very beautiful, huge bright red circles are embroidered across the entire field of the canvas, filling the entire surface. Gulkurpa, a bedspread, a bedspread for newlyweds, decorated with embroidery in the form of plants and trees, is also different. Previously, embroidery covered only part of the fabric, but now, almost the entire surface.

In the ornament, celestial bodies are increasingly found, in addition to plant themes. Toward the middle of the last century, universal and complex bedspreads or sets, “choishab palak”, became popular; these are bedspreads for the headboard and as a sheet, with a single pattern that unites them into a set.

Nowadays, many traditions have been abolished, but nevertheless, in many families of craftswomen, it remained inviolable. Since girls from childhood began to embroider panels, they completed it for their wedding, but according to tradition, they do not embroider panels completely, but leaving a small section unfinished so that the daughter can continue her mother’s work. Thus, symbolizing the girl’s wish to have a daughter who will continue the family tradition.

If you are planning a tour to Uzbekistan, be sure to pay attention to suzane in different cities. Only in this way will you understand that the patterns and style of embroidery are different.