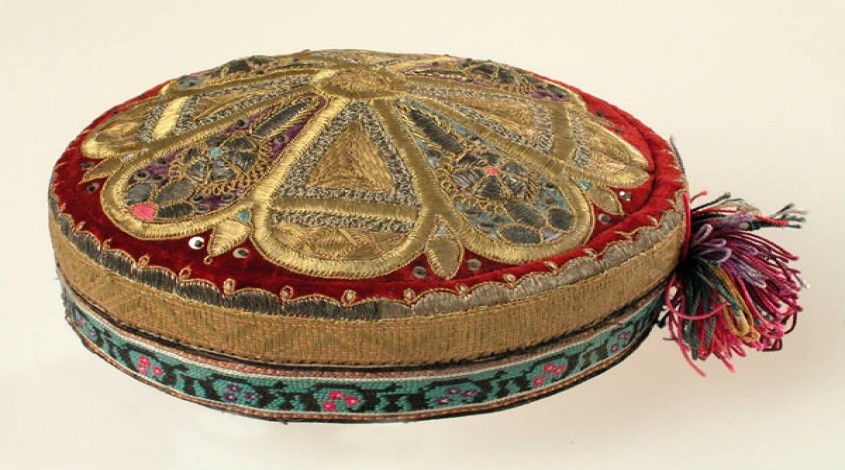 Skullcap decorate every man, and the bride, and the wise, and good fellow. For those who do not know, skullcap – a national headdress of many peoples of Central Asia, it is called a round or peaked cap with embroidered or woven patterns.

It is believed that wear a skullcap steel during Islam. According to the religion it was banned to adult Muslims to leave the house without head uncovered.

The word skullcap from the Tatar “tyubete”: Tube – translated as top. Uzbek name of the headdress – “duppi” or called “kalpok.” In XIX century skullcaps have become a popular hats, so there were round, cone-shaped, peaked, hemispherical, tetrahedral and domed skullcaps. The colors and decoration of product is diverse. 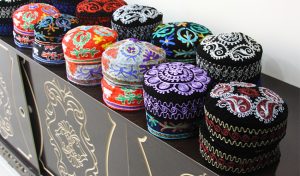 Accessories skullcap can be used by men and women, children and the elderly. For create men’s skullcaps usually use black satin or velvet. Of velvet, silk and brocade produced female skullcaps. Decorating products may include beadwork, beads, fringe trim.

There are six historically formed regional groups’ skullcaps – Tashkent, Bukhara, Samarkand, Kashkadarya, Khorezm, Surkhandarya. In each region defined its own style, which is transmitted from generation to generation. Ornamental motifs evolved over the time. 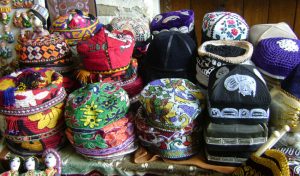 In composition of skullcaps you could see pictures of circles, bushes with blossoming flowers, shoots and leaves. Sometimes there are images of animals and colorful birds. Skullcap – duppi embroidered with silk embroidery, small crosses “iroki”, a kind of seam “Basma” and beads. Skilled workers, which have extensive experience in embroider products without drawing.

Uzbek skullcap became a national kind of arts and crafts which are widely spread in the national life got in the late nineteenth – mid twentieth centuries.

Uzbek skullcap known in worldwide. It is a part of the exposure of many museums. In Tashkent, in the State Museum of History, Arts and Applied Arts of Uzbekistan kept the most complete collection of skullcaps.