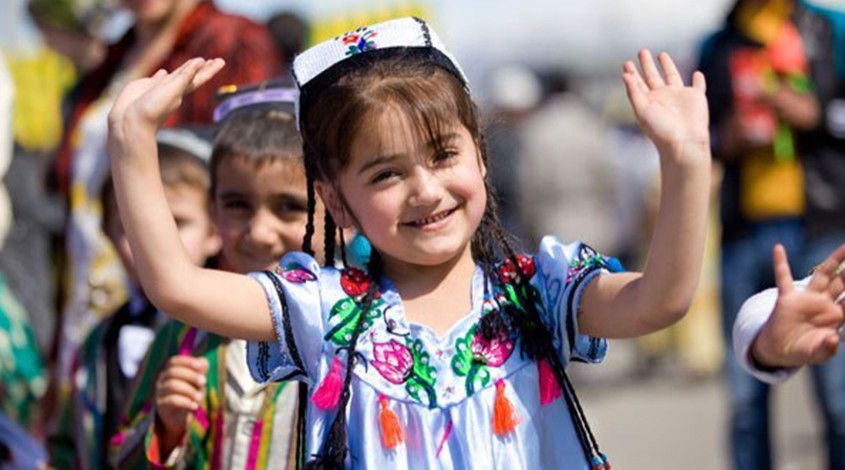 In Uzbekistan New year is celebrated two times a year. The first New year Uzbekistan people meet on European style – on January 1, and the second on eatern style – on March 21. In the country are usually days off during these holidays.

New Year is a holiday which is widely celebrated worldwide at different times in a year. By tradition in Uzbekistan, as well as in many other countries of the world, this holiday is considered as a family holiday. New year Uzbekistan people meet in a family circle at a set-out table and exchange with gifts. The symbol and an embodiment of new year are already such native and habitual Grandfather Frost, Snow Maiden and decorated New Year tree. In Uzbekistan Grandfather Frost is called Korbobo (“kor” in a translation from Uzbek means snow, “bobo” – a grandfather), and Snow Maiden – Korkiz. («kiz» – girl). On the eve of new year and on the day of a holiday in Uzbekistan on main squares of the cities of the country are decorated New Year trees, everywhere are held festivities.

14 January – Day of Defenders of the Native Land

This holiday is devoted to creation of armed forces in Uzbekistan. This day in the country is not a day off. On January 14, 1992 the parliament of Uzbekistan made a decision on transition of all parts and connections, military educational institutions and other military formations deployed in the territory of the country, under jurisdiction of the Republic of Uzbekistan. That became the beginning of creation of own armed forces. And on December 29, 1993 January 14 was declared as Day of Defenders of the Native Land. By tradition on this day of a main square the country (Mustakillik) the anthem of the Republic of Uzbekistan sounds, and under support of a military orchestra military divisions solemnly march. Also Supreme Commander of armed forces congratulates all defenders of the Native Land.

In Uzbekistan, as well as in many other countries of the world, on March 8 is celebrated International Women’s Day. This day in the country is day off. March 8 is a holiday of tenderness and feminity. Men on International Women’s Day tell warm words to the grandmothers, mothers, wives, daughters, girlfriends. They give them flowers and gifts. It is the first spring holiday, and it with an ulterior motive, after all the spring is also fine as each lovely lady.

On March 21 on day of a spring equinox in Uzbekistan an ancient national holiday is celebrated Navruz («Navruz bayrami»). From farce language Navruz is translated as «new day». This day is considered as the beginning of New Year. Today on the eve of the holiday Navruz, as well as in days of old, Uzbekistan people decorate houses, carry out hashars (cleanings) on streets. During this holiday all people go on visits. Navruz’s traditional festive dish is sumalyak, it is prepared from sprouted wheat. All family members participate in its preparation. Also on a festive table there should be various dishes from spring herbs, for example somsa. In independent Uzbekistan Navruz’s celebration found new scope and depth. It became the national holiday personifying friendship and a brotherhood of all people.

On May 9 – Day of Memory and Honor

The Victory Day in Uzbekistan is called «Day of Memory and Honor». On this holiday salute heroes who throughout time selflessly protected the Homeland, that having defended independence and peace life of the compatriots. Also this day is devoted to those who didn’t regret lives for the sake and benefits of the homeland. This holiday is very important for the senior generation who with a grief and pleasure in soul remember Victory Day. In the book of memory are immortalized names of 450 thousand heroes of Uzbekistan who didn`t not come back. It consists of 34 volumes. This important and memorable day for all inhabitants of Uzbekistan young and old alike assign flowers to the Eternal flame, monuments thereby paying memory tribute to victims for the sake of bright future in days of World War II.

Independence Day is an important and honourable state holiday of Uzbekistan. It has been widely and solemnly celebrated on September 1. This day in the country is day off. The state independence of Uzbekistan was proclaimed on August 31, 1991 in Tashkent on special 7 session of the Supreme Council of the Republic. This holiday is a pride of each inhabitant of Uzbekistan. In every city, kishlak and mahalla everyone, regardless of the nation and religion, colourfully and actively celebrates this holiday. In parks pass festivities, and at concert venues festive are held concerts with dances and songs .

Teachers’ Day has been celebrated in Uzbekistan since 1997. On this day all people are having a day off. In Uzbekistan, as well as in other countries of the world, teachers are deeply respected and valued. All pupils on this day with gratitude present to mentors flowers and gifts, express gratitude for teachers’ laborious work and support in initiatives. Teachers are our second parents, they give us that knowledge which is necessary for us always and everywhere, they form a personality in us.

This holiday is called Ramadan-Hait. It means spiritual and moral clarification. According to Islamic laws, it is celebrated on the 9th month of Hijra according to the Mohammedan Era. This holiday comes after an end of a fast “Uraza”. This religious practice proceeds 30 days in which the person is spiritually cleared. During a fast from sunrise to sunset it is not allowed to drink and eat, to afford bad thoughts and validly and recommended with kindness treat people. For each Muslim “Uraza” post is an obligatory ceremony which strengthens his belief. Sick people, children, travelers and faults may not observe a fast. On the last day of Uraza begins the holiday Ramadan-Hait. It lasts three days. The first day of a holiday is declared in Uzbekistan as a day off.

This greatest holiday of Muslims is considered as a sacrifice holiday. Formation of the holiday of Kurban Hait is connected with prophet Ibrahim who wanted to sacrifice to “Allah” his son, to that having in order to prove his belief. However he was stopped from this act by kind spirits and suggested him to sacrifice animals: rams, camels etc. and now all Muslims sacrifice animals.

Kurban Hait proceeds three days. All Muslims celebrate it in a bosom of a family. In these days people surely visit the sick and the poor, and also visit relatives. It should be noted that the first day of a holiday is declared in Uzbekistan as a day off.