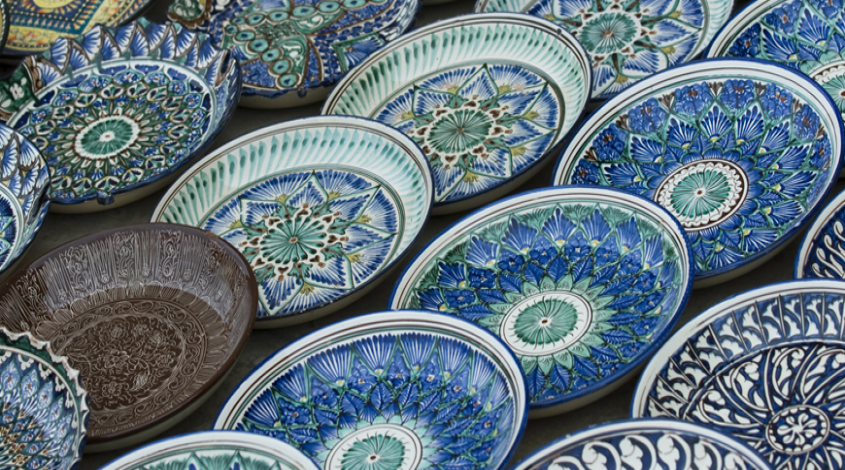 Since ancient times on the territory of Uzbekistan used clay to decorate the world. Because of mud and burnt brick built forts and temples, dwellings were built, and from clay ovens tandyrs-where baked bread. “lepeshki”

Clay products were very important in the family. In the pre-Islamic period of clay idols protected the family from the troubles. Clay was also the basis for the manufacture of toys, whistles, and it was used for making pottery. More than a century art pottery is considered honorable and respected. There are many school of ceramics in the regions of Uzbekistan, which have tradition goes back to the ancient times. 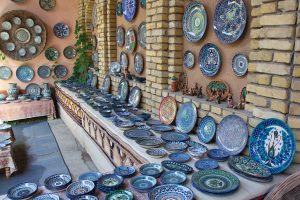 Many masters create clay toys, but few of them could bring to perfection this kind of work art. In the small town Gizhduvan, which is situated in forty kilometers from Bukhara, lives popular master “usto” Alisher Narzullaev. He is a master ceramist in the sixth generation. The master creates a pattern that rivet the attention of bright colors and resemble the color of peacock feathers various products are: lagans dishes, bowls, vases and braids. The secret of this exquisite work on the potter’s wheel-Charkhi, the creation of original forms of clay products and methods of painting Alisher took over from his father usto Ibadullo Narzullaeva. 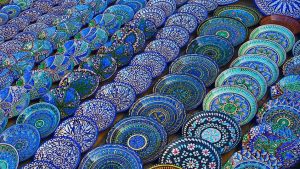 In every corner of the republic you could see its own particular style of painting and decorative forms. However, a true connoisseur of blue pottery should go to Fergana Valley, the place Rishton.

According to historical data, the pottery in Rishton formed about a thousand years ago. Rishtan ceramists – kuzagary considered descendants of the pioneers and custodians of ancient pottery traditions.

In Rishton you could see a large variety forms of products. A good gift for relatives and souvenirs can be lagans, braids and shokosa, deep containers with lids, large pitchers or hums, churns, bowls, pitchers kuzacha water vessels in the guise of a bird – urdak and more.

In the Middle Ages the art of Rishtan masters has become popular in many countries, lies on the Silk Road. Following the formation of Amir Temur Empire Movarounnakhr best products from around the world could be found in the bazaars of the empire. Especially valuable products include the finest white Chinese porcelain with cobalt painting.

Rishton called the cradle the art of ceramics in Fergana valley. Modern creations Rishtan masters adorn the museum exhibitions in France, Italy, Hungary, Belgium and Russia. Many collectors want to become the owner of a blue ceramic sample, as each piece is unique in shape and ornamentation.